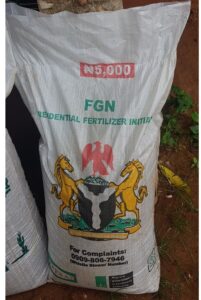 A new wave of scandal has compromised the directive of President Muhammadu Buhari to the extent that farmers are made to access fertilizer at the rate of N7,500 to N8,500 instead of the government approved price of N5,000.

Some farmers have cried out that coordinators of the presidential fertilizer Initiative at local government levels have turned the good intent of the Buhari government to boost food production into a lucrative business by adding mark-up of up to N3,000 to the advertised price using middlemen and merchants.

Investigations showed that in most cases across the countries, the appointed coordinators at local governments hoard the fertilizers thus creating artificial scarcity only to sell same to middlemen who subsequently use dealers in open markets to sell the fertilizer to farmers at high costs.

One of the affected farmers, Catherine Agbo, while lamenting the difficulties faced by farmers to access the federal government fertilizer wrote on her Facebook page:

“This is the federal government fertilizer powered by the presidential fertilizer Initiative. The fertilizer is to be accessed by farmers as I’m made to understand, at the local governments, at the rate of N5,000.

“You make several trips to the local government to ask how you can get some but the fertilizer coordinator is now a big man and no longer comes to the office. His lackeys around the office ask you your mission. You tell them. They ask you if you have allocation. You ask them what’s that and where it can be obtained. Only the coordinator has the answers. But he’s nowhere to be found.

“Time is running out. You decide to buy fertilizer from the market. The first products you see in the shops are those of the federal government with N5,000 boldly written on them and brazenly being sold by merchants for between N7,500 and N8,500.

“Did you say call the whistleblower’s number on the bag? Never mind! It’s permanently switched off. This is our country!”

Ignore the NASS, go ahead with your ...