World soccer governing body FIFA’s Independent Ethics Committee has handed the President of the Confederation of African Football (CAF), Ahmad Ahmad, a five-year ban from all football-related activities for corruption. 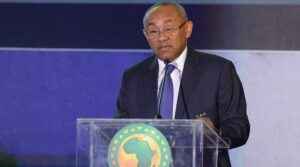 In addition to the sanction, the Madagascan administrator was punished with a fine of 200,000 Swiss Franc.

The adjudicatory chamber of the Independent Ethics Committee found Ahmad guilty of abuse of office, misappropriation of funds and, offering gifts and other benefits as CAF President and FIFA Vice-president.

Late last month, Ahmad disclosed his intention to run for a second term in office but he was down with coronavirus which forced him to hand over to CAF first Vice-president Constant Omari as he continues his recovery.

“The adjudicatory chamber of the independent Ethics Committee has found Ahmad Ahmad, the President of the Confederation of African Football (CAF) and a FIFA Vice-President, guilty of having breached art. 15 (Duty of loyalty), art. 20 (Offering and accepting gifts or other benefits) and art. 25 (Abuse of position) of the 2020 edition of the FIFA Code of Ethics, as well as art. 28 (Misappropriation of funds) of the 2018 edition,” the statement read on FIFA website.

AstraZeneca will have enough COVID-19 vaccine for ...