The matches will also be streamed live to a global audience on YouTube, as the organizers respond to the yearnings of potential spectators outside Nigeria who desire to follow the action. Winners of the FIFA 21 Gaming competition will smile home with some mouth-watering prizes, courtesy of Samsung. 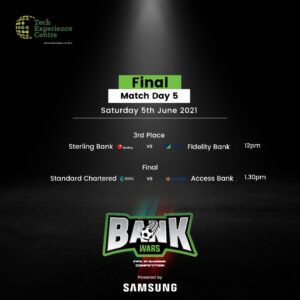 The inaugural edition of Bank Wars, a FIFA 21 Gaming competition for leading Nigerian banks, will come to an exciting climax on Saturday, June 5, 2021 as Access Bank and Standard Chartered go head-to-head in the final.

Earlier on Saturday, two losing semi-finalists, Fidelity Bank and Sterling Bank will trade tackles in the third place match. The game kicks off by 12pm.

Thereafter, attention will shift to the potentially heavyweight clash between the best two sides in the competition. Access Bank and Standard Chartered both have a 100 per cent record heading into the final and either side would be keen to claim the debut edition of the competition with a victory on Saturday.

To get to the final, Standard Chartered thrashed Sterling Bank 15 – 9 in the first semi-final encounter played on Saturday, May 29, 2021. The one-sided encounter saw the victorious side dominate the tie, leaving viewers who thronged the Tech Experience Centre, venue of the competition, in no doubt as to their intent ahead of the final. On its part, Access Bank equally served full notice of its desire to emerge inaugural winners of the competition, with an impressive 13 – 8 victory over Fidelity Bank in the second semi-final tie. The game, which kicked off by 1:45pm, witnessed a keenly-contested and action-filled encounter, which ended with Access Bank’s superior quality showing through on the day.

Excitement has reached fever-pitch level ahead of the third place and final matches on Saturday, with eager spectators already indicating their intention to storm the Tech Experience Centre to witness the encounters.

Meanwhile, the matches will also be streamed live to a global audience on YouTube, as the organizers respond to the yearnings of potential spectators outside Nigeria who desire to follow the action. The third place and final match can be streamed live here from 12pm on Saturday: https://youtu.be/M6aS9gU3M0E

Winners of the FIFA 21 Gaming competition will smile home with some mouth-watering prizes, courtesy of Samsung.

A Samsung 55-inch TV awaits the first prize winner while the runner-up will go home with a massive Samsung Refrigerator. Also, the third best team will claim a Samsung Washing Machine. In addition, there are prizes for individual representatives of the competing teams while the best goal of the competition (to be determined by votes) will fetch the scorer a Samsung 49-inch TV.

COVID-19: Local Production of vaccine not yet ...