The Legal Practitioners’ Privileges Committee (LPPC) at its 143rd meeting held on Friday. elevated 72 lawyers to the Senior Advocate of Nigeria, SAN, cadre, the highest number ever, a statement signed by Dr. Festus Akande, on behalf of the committee secretary has said. 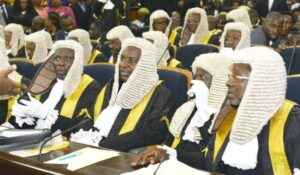 The committee had in September shortlisted a total of 137 candidates, both at advocate filtration stages and academic pre-qualification exercise, for the conferment of the coveted SAN rank.

The Supreme Court committee meets annually to promote lawyers to the highly-coveted rank which often confers special privileges on holders, including prioritized call of their cases.

Akande said: `’the rank of Senior Advocate of Nigeria is awarded as a mark of excellence to members of the legal profession who have distinguished themselves as advocates and law academics’’.

Hajo Sarki, the acting Chief Registrar of the Supreme Court and Secretary, LPPC, had earlier stated that, “All qualified candidates short listed are graded under the category system of the Legal Practitioners’ Privileges Committee Guidelines, 2018”.

She announced that the general public was at liberty to comment on the integrity, reputation and competence of the candidates, saying that any complaint (s) presented to the committee must be accompanied with a verifying affidavit deposed to before a Court of Record in Nigeria.

The successful candidates include the Chairman of the Independent Corrupt Practice and other related Offences Commission, Prof Bolaji Owasanoye, in the academics category.

Also on the list are two former General Secretaries of the Nigerian Bar Association, Isiaka Olagunju, and Afam Osigwe.

The statement also contained the name of a lawyer in the Federal Ministry of Justice, Mr Tijjani Gazali, a former National Legal Adviser of the All Progressives Congress, Babatunde Ogala, a former Dean of the Faculty of Law, University of Lagos, Prof Oyelowo Oyewo (academics).