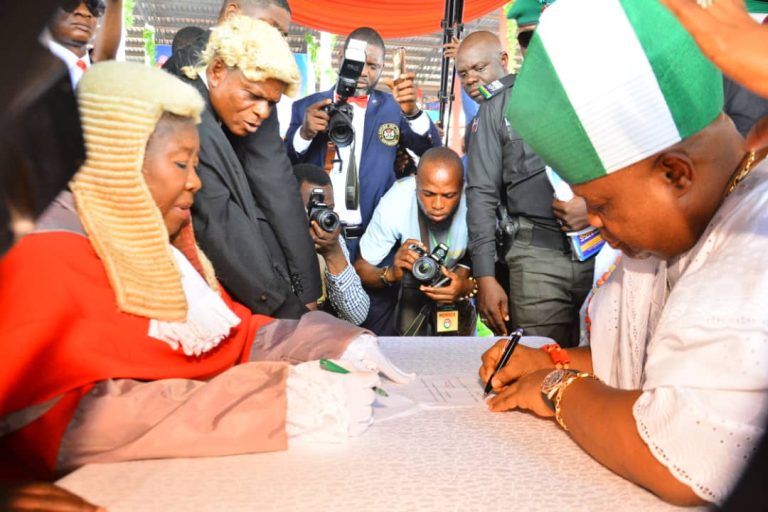 Sen. Ademola Adeleke of the Peoples Democratic Party (PDP) was sworn in on Sunday at Osogbo as the sixth executive governor of Osun.

He immediately ordered the freezing of the state’s accounts in banks and in other financial institutions.

Chief Judge of Osun, Justice Adepele Ojo, administered the oath of office on Adeleke at the Osogbo City Stadium.

He directed an immediate return to status quo ante of all appointments, placements and other major decisions taken by Oyetola’s administration from July 17, the day after the governorship election in the state.

Adeleke said a panel would be set up to conduct out an inventory of government assets and recover those in wrong hands.

The governor ordered an immediate reversal to the Constitutionally-recognised name of the state as Osun State from former “State of Osun’’.

The penultimate governor of Osun, Ogbeni Rauf Aregbesola, now Minister of Interior changed the name from Osun State to State of Osun.

“All government insignia, correspondences and signages should henceforth reflect Osun State, rather than `State of Osun’, which is unknown to the Nigerian Constitution.

“Under my watch as the governor of Osun, I will boldly correct all past injustices, corrupt acts or policies by any previous administration, which are against the collective interest of our people,’’ he said.

He assured that all directives he gave on Sunday would backed with appropriate executive orders.

Adeleke assured that as governor, he would meet Osun people’s expectations as the Chief Security Officer of the state.

He said his administration would also demonstrate a high sense of urgency, transparency, justice and innovation to tackle and solve the problems of poverty, illiteracy, disease, and poor infrastructure in the state.

“I know that as a product of the collective will of you my people, there is a heavy weight of history on my shoulders and I accept the urgency of your expectations.

“The depth of your aspirations and your conviction in me to build a better state will not be misplaced,’’ he said.

Adeleke said that all policies that were not favourable to the growth and effective local government administration would be reviewed in accordance with the law.

He assured labour unions in the state of his administration’s willingness to protect workers’ interests and to promote their welfare at all times, adding that he would be labour-friendly.

The governor frowned at what he described as mass employment by the immediate past administration without financial backing.

He pleaded with workers to give him few weeks to review and sort out all “malicious actions and confusions’’ which the immediate past administration had created since July 17.

The governor also promised to fulfil his campaign promises.

The promises included welfare of workers and pensioners; boosting the state’s economy, home-grown infrastructure policy and people-focused policy on education.

Others were affordable healthcare, security, social welfare and agro-based industrialisation for wealth and job creation.

“I hereby extend a strong hand of fellowship to the other arms of government, the Legislature and the Judiciary.

“As a former lawmaker and a graduate of criminal justice, I appreciate the importance of collaboration between the Executive, the Legislature and the Judiciary.

“I call on all political parties to unite in the best interest of the state. Election is over. Now is the time for governance. We are open to fresh ideas in line with our manifesto.

“For the purpose of emphasis, I will be a governor for all Osun people regardless of differences in language, faith, political affiliation or any other considerations,’’ he said.

Other still were the Ooni of Ife, Oba Adeyeye Ogunwusi, former Ekiti governor, Ayodele Fayose, Tony Elumelu, and David Adeleke, aka Davido, among others. (NAN)