Gov. Diri to Oboruduru: You’re a great Ambassador, an amazon 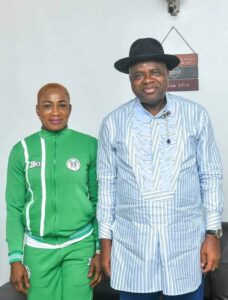 Governor Diri, who spoke on the telephone with Oboruduru before her event in Japan on Tuesday, said her heroic performance would spur younger athletes and wrestlers from her state of Bayelsa and Nigeria as a whole.

Noting that winning an Olympic medal was not a mean feat, the governor said he was particularly impressed that despite nursing a knee injury, she braved the odds to clinch a ‘golden’ silver medal for her country, which is unprecedented in the history of Nigeria’s participation in wrestling at the Olympics.

Governor Diri said his administration would continue to encourage and support the youths engaged in sports at all levels while describing Oboruduru as a “great ambassador of Bayelsa and a true inspiration.”

He noted that being one of the athletes from Bayelsa he adopted under the Federal Ministry of Sports’ “Adopt-An-Athlete Initiative” prior to the Olympics, Oboruduru made her state and country proud.

Diri assured her of the state government’s support so she can continue to impact and impart her skills into younger wrestlers and athletes that see her as a role model.