Governor Douye Diri of Bayelsa has ordered the release of the balance of cash reward pledged to athletes and sports administrators that participated in the last National Sports Festival in Abuja, a statement issued  on Friday, by the Chief Press Secretary to the Governor on Media, Mr Daniel Alabrah, has said. 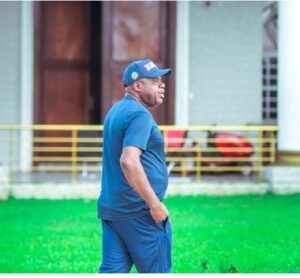 The immediate past administration of Seriake Dickson had pledged to reward the athletes and officials, following the performance of Team Bayelsa, which placed fifth on the medals table. A part of the pledge was redeemed just before the administration left office on Feb. 14 this year.

The statement said Diri gave the directive for the payment when the Commissioner for Youth and Sports Development, Mr Daniel Igali, led a procession of the athletes and officials to the Government House, to celebrate with the governor and his deputy over their victory at the Supreme Court.

He assured them that their sports kits would also be provided before the contingent departs for Benin, Edo State, for this year’s sports festival, which holds in a fortnight.

“I charge you to do your best. Contest keenly and fairly, and return with laurels, Diri told them, while pledging to release their sports kits for the festival before their departure for Benin.

“I know that the indomitable Ijaw spirit will spur you on to achieving success,” Gov. Diri said, pledging that he will also continue to promote sports development in the state, just as he did when he was Commissioner for Youth and Sports and urged them to exhibit exemplary conduct while participating in the festival. .

The Governor, who expressed dismay at the state-owned Bayelsa United Football Club playing in the lower division of the Nigeria Professional League, challenged the team to work hard towards  returning to the premier league.

In his remarks, Igali, the Commissioner for Youth and Sports Development, said the athletes and administrators were in the Government House to felicitate with the governor on his latest victory at the Supreme Court.

Presenting the state’s contingent for the sports festival to the governor, Igali also stated that Bayelsa United Football Club just participated in a pre-season tournament in Port Harcourt and emerged second, expressing his optimism that under Gov. Diri, the club would do better in the coming season. (NAN)

Media must keep away from fake news ...

UBA faces upsurge in lawsuits, may ...