The Ebonyi Governor, Chief Dave Umahi, has via a terse statement sacked political appointees from Ohaukwu local government Area of the state. No reason was given except to “allow greater participation of people in governance.”

Umahi gave the order on Friday in a statement signed by the Secretary to the State government, Mr Kenneth Ugbala. 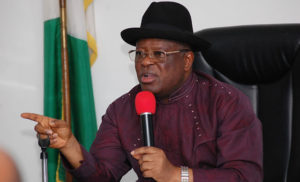 “In the avowed determination of Ebonyi State Government to allow greater participation of people in governance, Gov. David Umahi has approved the sack of political appointees from Ohaukwu Local Government Area with immediate effect.

“The office holders include: all the Coordinators, all the Executive Assistants (EAs), all the Senior Technical Assistants (STAs).

“Others include all the Technical Assistants (TAs), all the Liaison Officers and all the Management Committee Members of Development Centres,” Umahi stated.

ASUU set to call off strike as ...