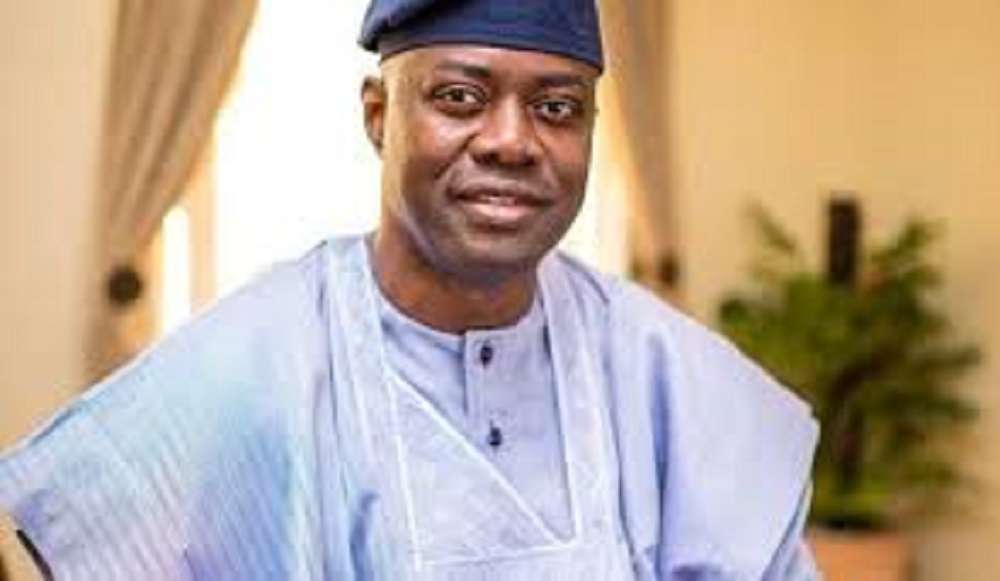 An Oyo State-based socio-political group, Oyo Kajola Group (OKG), on Thursday, declared that the administration of Governor ‘Seyi Makinde is ending 2021 on a very high note, with several landmark projects delivered during the calendar year.

The group, which scored Makinde high on the delivery of his campaign promises along the four service point agenda of security, health, education and economic expansion through agribusiness, maintained that the government has succeeded in repositioning and transforming Oyo State, with notable evidences in infrastructure development, growth in Internally Generated Revenue and improvement in the education sector, among others.

It added that the policies and programmes of the administration have also successfully ensured the state’s residents are moving from poverty to prosperity in line with the electioneering promise of the governor.

The Oyo Kajola Group, in a statement by its Media Coordinator, Comrade Adebayo Ayandele, described a statement credited to a member of the caretaker committee of the Oyo APC, an illegal contraption, that Makinde has no meaningful achievement in 31 months as farcical, unfounded and untrue.

According to the group, the Oyo APC has, by the said statement, proved that it cannot be cured of its post-2019 election loss syndrome, as it has been aimlessly striving to feed the public with lies, while presenting itself as a party of blind and bad losers, who do not want anything good for Oyo State.

The OKG maintained that 31 months of Governor Makinde’s governance in Oyo State have exposed the underbelly of the corrupt and nefarious government run by the APC in eight years, as a sector by sector analysis of the achievements of the Makinde government placed side by side with the APC government will show how wicked and ungodly the latter was.

The group wondered where the APC got the courage to criticise Makinde and publish outright lies despite the fact that the immediate past  APC government led by the late Senator Abiola Ajimobi was guilty of  wasting and looting the resources of Oyo State under the guise of building a four-star hotel beside the Premier Hotel, Ibadan, without any visible mark to show.

“That same government left scores of abandoned projects after frittering away huge resources,” the statement said.

“We in the Oyo Kajola Group have read a statement credited to a member of an illegal caretaker committee of the Oyo APC, which claimed that the administration of Governor Seyi Makinde has nothing to show for its 31 months in office.

“It is our considered view that the statement was authored by an individual who is only desperate to be heard and to remain relevant.

The statement does not represent the opinion of sensible and truthful APC members who are either residents or indigenes of Oyo State.

“But if that statement represents the view of all APC members in Oyo State, then we do not have any apology to brand the party as the headquarters of roguish and mendacious individuals, who have eyes but cannot see and ears but cannot hear.

“The statement made the ludicrous attempt to set Governor Makinde against his colleagues in Borno and Cross River states, but we wonder where they got the courage to compare Governor Makinde with Professor Babagana Zulum and Prof. Ben Ayade when they are too blind to see the developments under their noses.

“One would have expected the Oyo APC to compare the 31 months of Makinde administration with the 31 months of the government of the late leader of APC,  Senator Abiola Ajimobi, under whose reign residents of Oyo State groaned in hardship. Of course, there is no basis for comparing the light that the Makinde administration stands for and the darkness and wickedness that the APC government of Ajimobi and the incumbent federal government represent.

“In only the year 2021, the Makinde government has made tremendous impact on Oyo State, with several key projects across the health, education, road, security and agriculture sectors already delivered or ongoing.

“These are in addition to several impactful achievements recorded between May 2019 and December 2020.

“For the sake of records and the need to expose the falsehood that Oyo APC represents, we will list some of the achievements of the Makinde government in Oyo State in the last 31 months and also mention the names of a few of their leaders, who have used the facilities.

“In just 31 months, it is on record that the Makinde government started and completed the 65 kilometres Moniya-Ijaiye-Iseyin Road, which was commissioned in June. Several APC leaders, including Prof. Adeolu Akande, NCC Chairman; Hon. Shina Peller, House of Representatives Member and Mr. Wasiu Dauda, former Commissioner for Works, regularly ply that road.

“We dare the APC to show the world any evidence to prove that the Makinde administration was not the one that reconstructed that major road. They should also tell the world any inter-town road started or completed by the Ajimobi government in eight years.

“In just 12 months, the 9.7 kilometres Saki Township Road abandoned by the APC government since 2016, has been completed by the Makinde government, with an extension of over one kilometre already approved by the government.

“The Oyo APC should have asked its leaders in Saki, including former Minister of Communications, Barr. Adebayo Shittu and former Head of Service, Mrs. Wumi Ogunesan, what state the Abiola Ajimobi government left the road and what has become of it now before rushing to publish lies.

“In Ogbomoso, the LAUTECH-Under-G road started and completed within the first year in office of the Makinde administration is string testimonial to Makinde government’s strides in infrastructure development.

“The Oyo APC claims that Makinde has no meaningful achievement in 31 months, but can Ogbomoso residents and indeed all indigenes of Oyo State forget how Makinde promised and achieved the sole ownership of LAUTECH? We are sure that the rejected party has always been chronic haters of Ogbomoso people, which would explain why their government nearly killed off LAUTECH and they are also unhappy that LAUTECH is now solely-owned.

“The ongoing efforts of the Makinde government to upgrade the Ibadan Airport are also a noticeable achievement of the Makinde government. The efforts have led to the upgrade of the Airport to CAT 6 status by NCAA, with the Federal Airport Authority of Nigeria (FAAN) commending the governor in a letter with Ref No FAAN/IB/AM/421C/VOLI dated 29th April, 2021.

“If Dr. Olatunde Azeez cannot afford air tickets to fly Ibadan Airport to Abuja, he would have heard of the coming of Air Peace to the Airport as a result of the upgrade. If the APC does not count this as an achievement, we are not surprised, because its government watched the facility as it nearly became derelict.

“In Oyo City, the 691-shop ultramodern Akesan Market stands as a testimony to the achievements of the Makinde administration. The APC should verify this claim from the Member representing Oyo Federal Constituency, Hon. Akeem Adeyemi Skimeh.

“In the Sports sector, the remodelling and renovation of the Lekan Salami Sport Complex as well as the ongoing construction of six mini-stadia in Ibadan, Oyo, Iseyin, Saki, Ogbomoso and Igbo Ora, has redefined sport development in the state in the last 31 months.

“Though the Oyo APC, in its undying dedication to seeing that Oyo State does not make progress under Makinde’s watch, the first phase of the Lekan Salami Stadium was a huge success. Its leaders, former Governor Adebayo Alao-Akala and Arakunrin Rotimi Akeredolu attended the commissioning of the stadium and had words of commendations. Along with that success came the promotion of the 3SC to the NPFL. All these happened in 31 months.

“It is sad that Oyo APC has yielded itself to ignorance so badly that it has become incapable of saying the truth or embarking on a little research before publishing its jaundiced statement. If it did, it would have known the challenges that natural grass pitches have all over the world. The pitch at the Lekan Salami Stadium is only facing the early challenges that natural grass pitches in their early stages face. But no one expects the bad losers in the opposition APC, under whose watch every Oyo State asset became moribund, to celebrate the wins in the sport sector.

“The Oyo APC ridiculously cited the number of educational projects constructed by a governor in another state, but they should have informed the world how many Makinde government completed or constructed, even if it is one.

“Does the APC mean that the Makinde government, which paid the SUBEB counterpart funds for 2018, which Ajimobi failed to pay, and has also paid the funds for 2019, 2020 and 2021 has not constructed a single project? For the avoidance of doubts, the Makinde government, through SUBEB, has completed over 600 education infrastructure projects. Oyo APC only needs to find individuals who are not blind or deaf in the party and give them the mandate of verifying these claims.”

The OKG warned Oyo APC to stop advertising its ignorance and falsehood in the name of opposition politics, stating that efforts to discredit the Makinde government would always fail, as the people of Oyo State “now know better.”

According to the group, the APC successfully fooled residents of Oyo State for eight years during which it ran the state aground, but that it is now over for the wicked party, as residents of the state who are enroute to the Promised Land courtesy of Governor Makinde’s good governance, have vowed never to return to Egypt with APC.

“In the ridiculous statement by the APC, the party attempted a countdown to the end of the Makinde government, playing God as it always does. We want to state without equivocation that the remaining 17 months will only complete the four-year first tenure of Governor Makinde, they would not be the end of his government.

“The truth is that APC specialises in fooling people with misinformation. They tried to discredit Makinde for a few things that have not been done, ignoring the hundreds of achievements made by the Makinde administration, which has bested the APC government of eight years.

“The APC can go to any length to publish falsehood about Makinde’s achievements on the Light-Up Oyo project, the giant strides in Agribusiness, which has seen close to 6,000 youths trained in different areas of agriculture and the ongoing Fashola Agribusiness Industrial Hub and other key achievements, the people of Oyo State won’t be deceived.

“It equally comes as a huge surprise that the APC is blind to the massive reconstruction of 351 primary Healthcare facilities across the 351 electoral wards of Oyo State.

“In the last 31 months, Governor Makinde has engineered a modern Oyo State, where shared prosperity, human development and physical transformations have become the norm. The APC will never see these, because it does not want anything good for residents of Oyo State, who voted them out of office in 2019.

“While we are not saying that there are no challenges with the efforts being made by Governor Makinde to develop Oyo State, it is our considered view that his government has made Oyo better than it met it in 2019.

“We can only sympathise with the APC and pray that they get well soon from the incurable election defeat syndrome, which has ailed them since March 2019.”