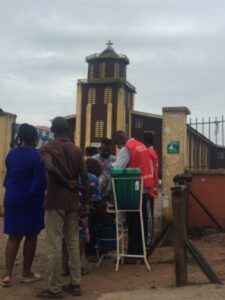 There were reported cases of violence, gunshots and vote-buying in some wards during the Edo State governorship election.

This has prompted heads of security for the governorship election to announce on Saturday that they have set out to investigate various areas and polling units where cases of gunshots were reported earlier during accreditation and voting.

Mr Adeleye Oyebade, Deputy Inspector-General of Police, who heads the Edo election Security Monitoring Team, told the News Agency of Nigeria (NAN) that they were moving to areas where they had earlier received complaints of gunshots.

Oyebade added that their visit was to also ensure that election activities were going on according  to electoral laws.

Though the electoral process has been largely peaceful, there were cases of gunshots in the morning of Saturday at Oza community, near Abudu in Orhiomwon Local Government Area, and Ologbo, a border town between Edo and Delta.

A member of one of the political parties at Ologbo in Ikpoba-Okha Local Government Area was said to have been allegedly shot by a suspected thug.

But the Enogie (traditional Head) of Ologbo Jason Akenzua, who confirmed hearing gunshots, said that the Divisional Police Officer for the area told him that the gunshots were from security operatives to disperse the unruly crowd in the area.

Cases of vote-buying were also reported in some wards. Voters were given cash rewards after voting for a particular party.