Hope Uzodimma is a thug in Government House – Rochas Okorocha

Senator Rochas Okorocha has described Governor Hope Uzodimma as a thug in government house who was using intimidation and thuggery to govern. He was responding to events of Sunday during which he was arrested and detained on the orders of the governor. 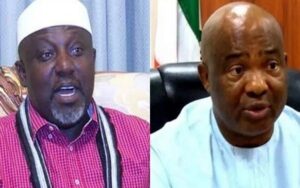 Okorocha who addressed his supporters on Monday urged them to remain calm and law-abiding in the face of the tension which he claimed was created by the governor.

He accused the governor of exhibiting barbaric tendencies especially with the enactment of a law that allows him to arrest and detain people at will.

According to Okorocha, the only achievements of the governor since he came into office was the destruction of hospital built by him, destruction of roundabouts which hitherto added beauty to the state. He accused the governor of owing workers, teachers and pensioners but rather than use words of encouragement to pacify them, has been inciting them to violence.

Meanwhile, an aide to Sen. Rochas Okorocha, Eberendu Chiimechefulem, his legislative aide, Steve Asinuobi and 12 others were arraigned before a magistrate’s court sitting in Owerri on Monday.

The 14 defendants were arraigned on a six-count charge bordering on conspiracy, breach of public peace, possession of firearms and unlawful destruction of the official seal of the Imo Government.

The defendants were arrested on Sunday, February 21, for allegedly breaking into a premises sealed by the state government.

The premises known as Royal Spring Palm Estate is said to be owned by the wife of Okorocha, Nkechi.

The presiding magistrate, B.U Adikaibe, who ruled on the bail application made for the release of the defendants, granted them bail to the tune of N5m each.

The magistrate also insisted that a traditional ruler in the state must stand in as a surety.