Ibori loot: Why Delta can’t have it; FG still working on another £100m – Malami

The Attorney-General of the Federation, Abubakar Malami, SAN, has explained on Tuesday why the loot recovered from former Delta State Governor, James Ibori will be used for federal projects instead of being returned to Delta as some persons are canvassing. 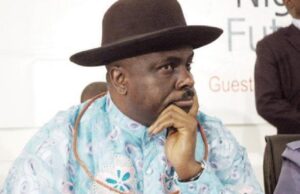 Malami had, earlier on Tuesday with the British High Commissioner to Nigeria, Catriona Laing, announced the return of £4.2 million recovered from Mr. Ibori and his friends.

Malami said that the law that was alleged to have been violated by Ibori was a federal law, adding that the parties of interests involved in the repatriation of the funds were national and not sub-national governments.

The government said that the funds, set to arrive in the country within two weeks, are expected to be used for the construction of the second Niger Bridge, Abuja-Kano road, and Lagos-Ibadan Express road and not returned to the Delta State Government where it was pilfered from.

“The major consideration relating to who is entitled to a fraction or perhaps the money in its entirety is a function of law and international diplomacy,” Mr. Malami said during his Tuesday appearance on Channels Television’s Politics Today.

Meanwhile, Malami has hinted that more Ibori loot in the neighbourhood of £100 million is being prospected by the Nigerian government, stressing that the sum of £4.2 million already recovered is only a fraction of a bigger lump sum.