I’m definitely not the right person to speak on arms, ammunition purchased by my predecessors – COAS tells Reps

The House of Representatives ad-hoc committee on arms and ammunition commenced the investigation into arms purchase by the military on Tuesday.

Things took a different turn when the Chief of Army Staff, refused to speak further on a document which he had presented to the committee, asking the committee instead to review the documents which he considered self-explanatory.

The COAS insisted that he had barely settled into office and is definitely not the right person to speak on arms and ammunition purchased by his predecessors.

“The submission before you speaks to the report before you. It is an executive summary. It is very self-explanatory to the extent that it has been pluralised. When you demanded this report, you stated a specific period for which you wanted it. 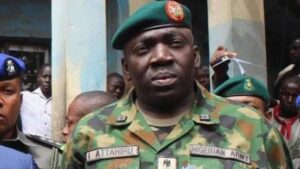 “You may wish to recall that the Chief of Army Staff took over the mantle of leadership barely two months ago.

“The period for which you want this report having been summarised in the executive summary explained whatever details you require.

“Issues of arms procurement that you so demand to know were done by specific individuals, I will rather you call these individuals to explain to you very specific issues the general explanation is contained in this report,” the COAS told the lawmakers.

A member of the committee from Delta State, Ejiro Oghene, had earlier during the proceedings frowned at the COAS explanation for not appearing before the committee.

According to him, the National Assembly is the House of the Nigerian people and everybody in public office works for Nigerians adding that the House speaks for the people.

“When we ask you to come, the people are the ones speaking, sovereignty lies in the people; if we see it like this, things will be different.

“I expect that the COAS tenders an apology, not an explanation; you are serving the people and they are as your employer,” he said.

The COAS in response said his explanation serves as an apology.

“When you say I offered an explanation, it is as good as an apology. It only tells you the reasons why I wasn’t here and the reasons are pungent enough,” COAS told the lawmakers.

However, as tensions were rising, Chairman of the Committee, Olaide Akinremi ruled that the hearing goes into a closed-door meeting and the media were asked to leave the hearing.

The committee is reviewing the purchase, use, and control of arms, ammunition, and related hardware by the military, paramilitary, and other law enforcement agencies in Nigeria.