Prof. Mahmood Yakubu, Chairman, Independent National Electoral Commission (INEC), has urged the National Assembly to use a bipartisan approach in amending the Electoral Act to help improve conduct of elections in the country. 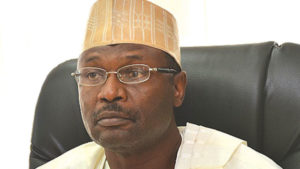 Yakubu made the call at the inauguration of the Joint Technical Committee on the Electoral Act Amendment Bill on Friday in Abuja.

The event was organised by the National Assembly Joint Committee on INEC and Electoral Matters with support from Policy and Legal Advocacy Centre (PLAC) and UK Foreign and Commonwealth Development Office (FCDO).

Yakubu said that the amendment was timely, saying that more fundamentally, the reforms must be impactful, approached from a bipartisan angle, devoid of divisive issues and concluded at least by the first quarter of 2021.

President of the Senate, Ahmad Lawan had in 2020, pledged the commitment of the National Assembly to the passage of the Electoral Act amendment bill by the end of first quarter of 2021.

The INEC chairman welcomed the renewed efforts and commitment by the leadership of the National Assembly towards amending the electoral legal framework for the conduct of elections.

Yakubu said that the renewed drive by the legislature was timely and must be sustained and approached with a sense of history and urgency.

He said that the efforts must be diffused with clearly defined timelines, priority, interventions and strategic thinking.

Yakubu said that the commission was fully committed to the amendment process and would continue to offer suggestions and recommendations that would help improve the regime of elections in the country.

He further said that amending the electoral legal framework would not automatically lead to improvement in the management and conduct of elections.

“The Constitution and the Electoral Act are not self-executory, and both operate through the actions and inactions of the critical stakeholders in the electoral process,” he said.

A member of the Technical Committee, Mr Sadiq Mua’azu said that one of the advantages of the electoral reforms was to bring all amendments together in one document.

“The bill mandates all political parties to ensure that women leaders are women or persons of the feminine gender and that all youth leaders are between the ages of 18 to 45 at the date of elections into such offices.

“The bill also seeks to increase maximum election expenses to be incurred by Presidential or Governorship Candidates, Senatorial or House of Representatives Candidates.

Sen. Kabiru Gaya, Chairman, Senate Committee on INEC, said that the bill when passed and assented would tremendously change the political sphere of the nation.

“The amending of the Electoral Act would indeed positively affect the electoral process and procedures which has posed challenges and raised controversies that have put the mantra of free, fair and credible elections to question,” he said.

He said that the Technical Committee was inaugurated in order to achieve the set timeline for passing the bill by the end of the first quarter of 2021.

Attorney General of the Federation and Minister of Justice Abubakar Malami, pledged to work with the technical committee to ensure unhindered presidential assent to the bill.

Malami was represented by Special Assistant to the President on Justice Reform and International Relations, Mrs Juliet Ibekaku-Nwagwu.

“I will continue to work more closely with the National Assembly to ensure that the bill is eventually passed as scheduled.

“I recall that immediately after the 2015 elections, the President approved the inauguration of the constitutional and electoral reform committees in 2016, we have been working with the National Assembly and we came up with four bills that have been approved by the Federal Executive Council and forwarded to the National Assembly,” he said.

In a goodwill message, Head, Governance and Stability, FCDO, Mr Sam Waldock said that the UK was a proud supporter of Nigeria’s democratic process.

“In the last five years, the UK has invested more than 50 million pounds in Nigeria’s democratic process and it’s the largest democracy in Africa and it is the leading member of Commonwealth.

“We commend the National Assembly for its work to reform this legislation which will go a long way even after the next election.

“Setting up a technical sub-committee to expedite the work on this bill is a very important contribution to Nigeria’s electoral legal framework,” he said.

Also, Executive Director, PLAC, Mr Clement Nwankwo expressed optimism that the bill would be passed within the shortest possible time.

“Following the experience of the last failed attempt to sign the Electoral Act in 2018, it is quite clear that this commitment is unanimous on all sides to ensure that we do have a new Electoral Act in place.

” With the support from the UK Foreign Commonwealth and Development Office, we are able to collaborate with the National Assembly to deliver on the commitment that has been made by the assembly,” Nwankwo said.(NAN)