Local News
Home›Local News›Insecurity: Come up with legislation that will proscribe disarmament in the country -Tambuwal urges FG

Insecurity: Come up with legislation that will proscribe disarmament in the country -Tambuwal urges FG

Gov. Aminu Tambuwal of Sokoto State has urged the National Assembly (NASS) to produce a legislation that would prescribe death sentence or life imprisonment for unlawful possession of arms in the country.

Tambuwal made this call in a statement issued by his Special Adviser on Media and Publicity, Malam Muhammad Bello.

The statement said Tambuwal was talking to students and youths in an interactive session on security matters in Sokoto State on Saturday.

He expressed dissatisfaction over the proliferation of small and light weapons in the country.

“I am therefore appealing to NASS and the Presidency to come up with a legislation that will proscribe disarmament in the country.

“Those in possession of unlicenced arms should go and register them and if the arms cannot be licensed, they should be surrendered to government and the government will pay them,” he said.

He said “like a death sentence or life imprisonment should be prescribed for unlawful possession of arms. This is the only way we can have peace in this country,” he said.

He also suggested a robust recruitment and equpping of security agencies, especially, the police, in order to ensure the protection of the citizens.

He urged stakeholders to improve renumeration and life insurance policy for security operatives in the country.

Tambuwal commended the federal government for establishing the Police Trust Fund, which would go a long way in addressing their challenges.

On the activities of bandits in some parts of Sokoto, the governor said arrangements are in top gear to establish a state vigilante group which could be deployed to troubled areas.

He explained that the group would operate within the ambit of the law and in conjunction with the security agencies, so that “they will not take laws into their hands”. 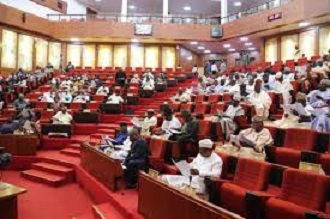 He recalled that the recent reprisal attacks in which the bandits killed dozens was triggered by the activities of vigilante in some of the areas attacked.

The governor noted that ignorance and climate change are among the causes of insecurity in the state.

He said some of the bandits lacked even basic knowledge of Islam, thus, ignorant of what the religion says on killing of innocent souls.

He tasked the dominant religious groups in the state to take their preachings to villages and other remote areas where it was needed the most, noting that education is vital to peace and development.(NAN)