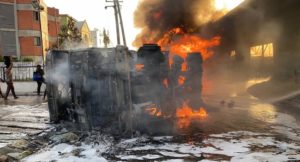 The Director, Adamawa Fire Service Directorate, Mr Abdullahi Adamu, has described how a dawn fire destroyed a petrol-laden tanker, some shops and other property worth millions of naira around Airport Roundabout in Jimeta.

He said that the incident occurred on Monday at about 6:00 a.m. when the petrol-laden tanker was involved in an accident which resulted in the spilling of the fuel and the concomitant fire outbreak.

He said that the state fire service, in collaboration with other sister fire stations, put out the fire with no loss of life.

“We teamed up and put out the fire. We were able to separate the head of the truck from the tank; there was no loss of life.

“It was only the tank, the oil and nearby shops that got burnt. We thank God it did not split to a nearby filling station,” he said.

Mallam Usaini Abubakar, Chairman of Traders Association in the Area, said that the fire gutted 12 container shops with their goods.

He commended the efforts of the fire service and security agencies in controlling the situation and called on government to come to their aid.

He said that his business, which was close to the scene of the incident, was affected alongside two vehicles parked close-by. (NAN)

Anambra election: What we expect from politicians ...