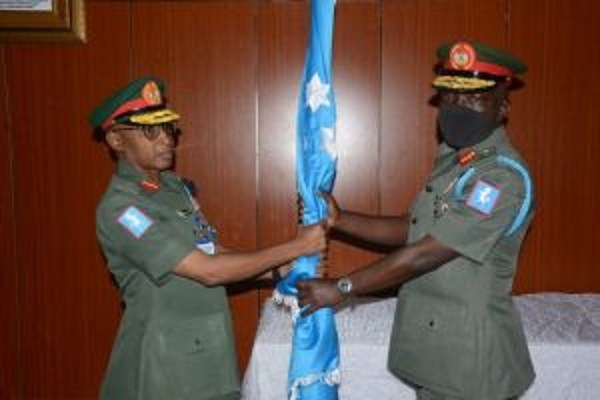 Shortly after taking over from Mukhtar, the new GOC charged officers and men of the Division to brace up for the challenges ahead.

The new GOC is a member of the 39 regular course of the Nigerian Defence Academy. Until his latest deployment, he was the GOC 82 Division, Nigerian Army Enugu.

Lagbaja solicited the support and understanding of critical stakeholders in rallying around formations and units of the Division by providing necessary information that would aid troops in the conduct of their operations.

The GOC commended the press for supporting the activities of the Division and craved for continuous support towards ensuring more stability within its area of responsibility.

Lagbaja commended his predecessor for services he rendered to the Division and to Kaduna State, and wished him success in his new assignment.

Earlier, Maj.-Gen Mukhtar said that under his watch, the Division did its best to tackle security challenges within its area of responsibility.

He charged personnel to be more committed; re-dedicate their time and efforts to the execution of all assigned tasks and extend maximum co-operation to the new GOC.

On July 28, the Chief of Army Staff, Lieutenant General Faruk Yahaya, approved the postings and appointments of senior officers as part of efforts to reposition the Army for operational efficiency and proficiency.

He charged newly-appointed senior officers to redouble their efforts in tackling the insecurity bedevilling the nation as they assume their new appointments. (NAN)