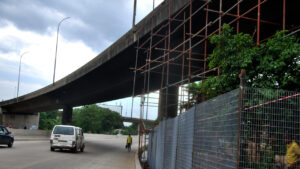 The Lagos State Government has announced that the ongoing repair of the Airport Flyover along Apapa/Oshodi Expressway has been rescheduled for completion by  end of October 2021.

The state Commissioner for Transportation, Dr Frederic Oladeinde made this known in a statement on Thursday.

Oladeinde said the completion of work on the bridge was earlier scheduled for Oct. 3.

The commissioner explained that the extension of the repair works on the bridge was to allow the concrete jacketing of the damaged bridge achieve maximum strength before opening.

He said: “I want to assure motorists that the main carriage way would be opened as soon as the aforementioned process is completed.

“It is important to note that any form of haste will be detrimental to the progress made in restoring the structure back to optimum standard.”

The commissioner said motorists would continue with the current traffic diversion plan involving the use of the alternate lanes freed up by the contractors during the course of the rehabilitation.

Oladeinde praised the citizenry for their perseverance in the face of simultaneous construction works within the state.

He appealed for more cooperation with the government and its agencies on the field as it would speed up the project and provide seamless movement in the nearest future.

The structural strength of the bridge was weakened by the inferno that occurred in January 2021 as a result of a petrol tanker accident.