Following the enrolment of eligible residents of the State for the first phase of the Cash Transfer initiative of the Federal Government, each of the beneficiary households of the Conditional Cash Transfer policy, which kicked off in April this year, received the sum of N10,000 for the months of May and June 2020.

The conditional Cash Transfer policy, an initiative of the Federal Government to the most vulnerable and indigent of the society was officially flagged off in  Amuwo Odofin Local Government Area of the State.

The initiative, which will be administered through the designated household caregiver, who will in turn utilise the money for the better living of the household, was flagged off by the Commissioner for Wealth Creation and Employment, Mrs. Yetunde Arobieke and top federal government functionaries.

The Commissioner lauded the efforts of the Federal Government, through the National Social Safety Nets Coordinating Office under the Ministry of Humanitarian Affairs, Disaster Management and Social Development, for their support in the establishment of the cash transfer unit in Lagos State while also expressing her gratitude to Governor Babajide Sanwo-Olu for his commitment and enormous support in making the implementation a success.

Arobieke noted that the process of enrolment of beneficiary households commenced in April 2020 with the most vulnerable, aged and indigent citizens identified.

“It is of the essence to mention that the process of enrolment of about 8,147 households captured by the State Cash Transfer Office was approved by the Governor and commenced in the month of April to fast-track a conditional Cash transfer to beneficiary households in order to alleviate the sufferings of the poor and vulnerable”, Arobieke explained.

While noting that the beneficiaries were painstakingly selected by the Cash Transfer Office in six pilot Local Government Areas and validated through the issuance of identification cards in order to partake in the exercise, the Commissioner appealed to those that have not registered to key into the programme in order to benefit from the palliative measures.

“I will like to appeal to Lagosians that this is a continuous exercise and in case you are yet to be captured in this batch, there are more opportunities that would be cascaded to the rest of the Local Government Areas in the State”, she said. 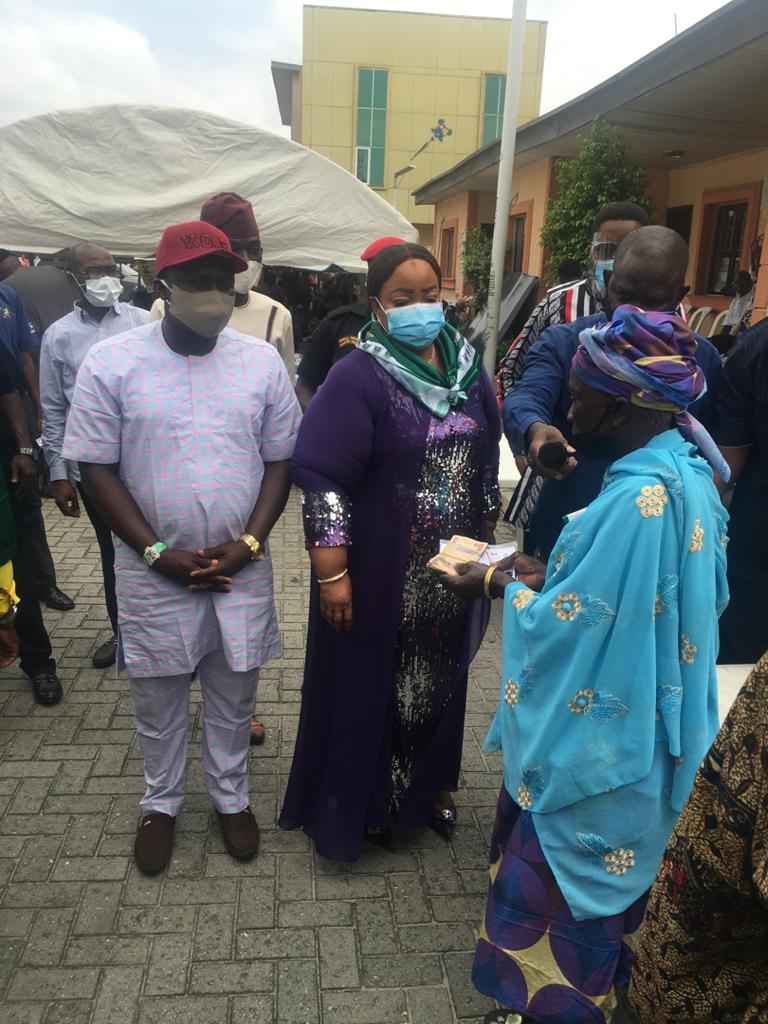 The National Programme Coordinator of the Scheme, Dr. Temitope Shinkaye, who was represented by Mr. Mohammed Abdullah at the event, stated that the programme focuses mainly on the poor and vulnerable in the country as identified through a combination of geographic and community-based targeting mechanism.

He stated that the programme facilitates the transfer of N5000 per month to the identified beneficiaries, noting that payment is made every two months to eligible households selected from the national social register while the programme also offers capacity building to beneficiaries for empowerment on self reliance.

Abdullahi disclosed that beneficiaries are also trained on life skills and micro-business development in order to engage in viable business activities that will sustain them in future.

He thanked the Lagos State Government for its support and commitment in registering vulnerable households in the State, stressing that it has helped to incorporate them into the Federal Government National Social Register for the vulnerable.

He expressed his appreciation to the Federal and State Governments for the laudable initiative, expressing confidence that it will help to alleviate the suffering of the poor and most vulnerable.

The Household Uplifting Programme (HUP), otherwise known as Conditioner Cash Transfer, was introduced in 2016 as one of the four social investment programmes anchored by the Federal Government to tackle poverty and hunger, focusing on a more equitable distribution of resources to the vulnerable population, including the aged and physically challenged.