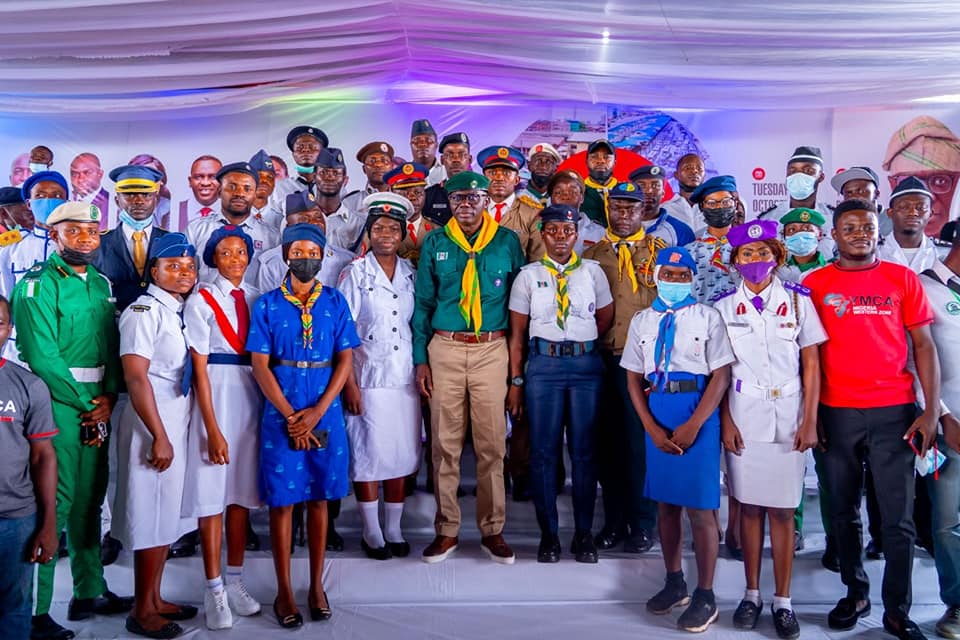 Drawing lessons from the aftermath of the string of violence that trailed the youth-led nationwide protests against police brutality last year, Lagos State Government has brokered a reconciliation with youths in the State.

Youngsters across the State, on Tuesday, defied the national holiday and came together to participate in a peace conference aimed at creating a common platform to pursue resolution to conflicts.

Governor Babajide Sanwo-Olu, who was physically in attendance, listened with rapt attention as the youths led conversation on how they could effectively channel their grievances to the authorities.

It was all at an event with the theme: “Rebuilding for Greatness: Peaceful Conflict Resolution”, held at the LTV Blue Roof and organised by the Ministry of Youth and Social Development. The event was facilitated by the Governor’s Senior Special Assistant on Youth Matters, Saheed Akanbi.

The seven-man discussion panel moderated by Mazi Sam Uche Anyamele, a filmmaker, set the tone for the Governor’s response to various suggestions and ideas shared by youths at the event.

With the commitment to peace pledged by the youth, the Governor said Lagos could now undergo a total healing process after last year’s coordinated attacks on its assets, which also resulted in loss of lives and livelihoods.

“Today is a day of reconciliation and it is about our teeming youths. This is the moment to create a common ground and take ownership of our future. We have indeed assessed what we have passed through as a people; it’s now the moment to come together and build our lives together.

“This event is about aggregating all the conversations of the millions of youths that have been represented here. All of us have agreed that, when we work together, we can build a resilient society we will truly be proud of. We will continue to build, engage and work with our young people. I certainly will not give up on you as partners in progress and your ability to bring about positive changes.”

Sanwo-Olu agreed with the youths that there was need for inter-generational dialogue to proactively address issues that may lead to conflict, assuring the participants of his administration’s readiness to champion causes that would be beneficial to young people.

The Governor said he believed the youth must not only be granted a stakeholder status in the State’s project, but also be given prime seats at places where decisions are taken. He said his administration had shown example by appointing scores of young people under 40 years into the State Executive Council, political aides and administrators of Government’s agencies.

Sanwo-Olu also promised to increase the State’s investment in human capital development and equip the youths with requisite 21st skills that would empower them economically.

“I thank all the youths who participate in this forum for the valuable suggestions offered and the ideas shared. I’m taking full responsibility and ownership of all the feedback recommended for me here. All the points have been taken and I will continue to rely on them in the course of governance.”

Commissioner for Youth and Social Development, Hon. Segun Dawodu, said the State Government recognised the youth as stakeholders in peace building and violence prevention, stressing that the Governor’s physical presence at the event was an indication of Sanwo-Olu’s commitment to turn listening ears to issues faced by the youth.

Represented by Permanent Secretary in the Ministry, Dr. Oluwagbemiga Aina, the Commissioner said the aftermath of negative conflicts would never be beneficial to any society and its people.

“Rebuilding Lagos for greatness is a multifaceted task that involves constructing a formidable identity using the power of the State to unify people of common interests for a common goal.

Together we will rebuild, recover and Lagos will emerge stronger. The aftermath of the past crisis will not determine the destiny of the State.

“We can find solution to our conflict in our unique education and value system, in our creativity and innovation, in our hard work and resilience. As we foster relationships with our youths, it is a charge on all of us to take responsibility for our today and uphold human dignity, equity, social justice, human rights and inclusiveness.”

The keynote speaker and Deputy Vice Chancellor of the Lagos State University (LASU), Prof. Wahab Ellias, said the theme of the event connoted a resilient city, stressing that conflict remained endemic and part of the society’s makeup.

The Professor of Sociology posited that conflict remained inherent in any society where there constant struggles among social classes usually took place.

He however said constructive engagement and peaceful dialogue are key to settling all conflicts, irrespective of their nature.

“Clashes of ideas among the social classes and cultural differences are part of the reasons why conflicts arise. There is nothing bad in conflict, but a conflict that is not progressive in nature is bad and inimical to the peace in the society,” he said.

The don appealed to the Government to keep its promise of raising investment in human capital, which, he said, remained a key factor in preventing conflict. Youths, Ellias said, are the most important resources for the Government to harness.

Some of the participants had the opportunity to share their thoughts.

Miss Halimat Akanni-Shelle, thanked the Governor for giving the youth a listening ear and privilege to rub minds with decision makers.

“We are ready to join hands and take action in building a Lagos that is safe and functional for all of us,” she said.

She said Sanwo-Olu was not just leading by action, but showing examples that could be emulated.

“Despite the ugly circumstances that befell Lagos in the past year, the Governor has remained focused on the situation and focused on things that matter. This is progressive leadership.”

Leader of National Association of Nigerian Students (NANS) in Lagos, Comrade Rasheed Ogunsanya, described the youth as the engine room of Lagos’ resilience, thanking the Governor for identifying with young people.

Lagos State chairman of the National Youth Council of Nigeria (NYCN), Billiaminu Oba, presented a 14-page suggestion and resolution on the way forward vis-a-vis youth engagement to the Governor.