Nigeria is reputed to be a difficult place to do business, especially if your business is the type that requires constant power supply. It’s even more cumbersome if other businesses depend on your business to thrive. When your business is an enabler of other businesses, you are encumbered with more pressure and responsibility. You must grind out success for others to succeed. That’s the dilemma of Leo Stan Ekeh over three decades ago when he returned from the United Kingdom to birth an information communications technology (ICT) start-up. And he chose the complex computer ecosystem, then thought to be out of the ken of knowledge for Africa and Africans. Against odds, he has made a success of it, etching his name on the boulder of history. 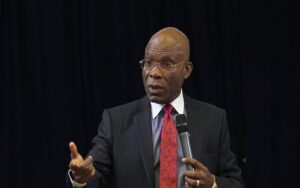 Today, February 22, as he marks his 65th birthday, it’s apposite to peek into the life odyssey of the man who easily typifies the true Nigerian spirit of courage and productivity even in the face of crippling headwinds. Needless to say that no comet heralded his birth but his life has been a herald of hope for humanity and the nation. And if every victory has a scar, as it’s often said, then Leo Stan bears many scars, seen and unseen.

He has fought many battles chief of which is the battle against ignorance. The Imo State-born computer magnate is reputed to be behind the computerisation of many Nigerian secondary schools, higher institutions and corporates. He has spent more than half of his life working to change the orientation of Nigeria and Nigerians from analogue to digital. This has seen him at the cutting edge of pioneering several tech-based initiatives, and growing a small computer type-setting office operating from a rather obscure office in Alausa, Lagos into a conglomerate with interests in ICT, property, banking, e-commerce, oil, among others.

Gifted with unrelenting entrepreneurial spunk, he has since grown his yesterday’s start-up from its initial one-office space in Lagos to a multinational with offices in Africa, Europe and Asia.

So, who’s Leo Stan? He’s the one his close associates call the pioneer-in-chief. He pioneered desktop publishing in Nigeria. It’s akin to setting the captives free. He changed the entire Nigerian publishing landscape from its slow and dodgy analogue routine to a smart, clean digital patch. Newspapers, advertising agencies and printing houses were the early birds to embrace what was then seen as the magic box, the computer. At a time Nigerian media houses felt very comfortable with their typewriters and compugraphic machines, it took Leo Stan to disrupt the system. He pushed aside their burly compugraphic machines and placed in their hands the then rave of the moment, Apple computers.

He’s the one who for the first time introduced WiMAX (Worldwide Interoperability for Microwave Access) to Nigeria, planting the first hub in Yobe State in 2007, and exposing the state to a brave new world of opportunities and skill in cyberspace. He pioneered the deployment of digital dispensing pumps at Nigerian filling stations, a business born out of circumstance than anything else. Before he partnered with then Elf oil (now Total Plc) to upscale fuel dispensing with digital dispensers, he had fallen victim to a notorious scam among petrol station attendants who cashed in on the unintelligent analogue fuel pumps to cheat on motorists. Leo Stan was fleeced at a filling station in Ikeja, Lagos. It was that incident that opened his eyes to the business opportunity unnoticed by many at the filling stations. He’s the archetypal street-smart opportunistic investor.

Again, who’s he? He’s the undisputed pioneer of e-Commerce in Nigeria when he launched BuyRightAfrica.com in 2012. Aside being the forerunner of all the e-commerce ventures in Nigeria, BuyRightAfrica, though suffered a temporary death, was later resurrected by his son, Prince Nnamdi Ekeh, first as Yudala and now Konga.

He’s the man who, having made a success of automating corporate Nigeria with exotic computer brands, decided to create his own brand, a Nigerian computer identity. He made good his ambition when he launched the Zinox range in 2001 during President Olusegun Obasanjo tenure. Zinox was not just an expression of patriotism and ambition, it was a carefully created brand and the first indigenous computer to earn both Intel and Microsoft certification. It came bundled with inbuilt power surge protector, taking cognisance of Nigeria’s epileptic power supply prone to surges and brownouts. Plus, it has a naira sign cleverly engrafted as part of the Q-w-e-r-t-y keyboard. This gave Zinox a shoulder-high advantage over other exotic brands to the delight of President Obasanjo who had to issue a directive to ministries, departments and agencies (MDAs) to standardise their tech operations on Zinox and other indigenous brands most of which were swamped in the marketplace by foreign brands until Zinox burst into the stage. Today, the Zinox brand has not only made inroad into Nigerian offices, it has been deployed to host major international conferences and events including the 7th Ordinary Session of the Assembly of the Africa Union (AU) from July 2 to 5, 2006 in Banjul, The Gambia. The list is long.

Leo Stan is the patriot who made game-changing interventions during Nigeria’s 2007 and 2011 general elections. He leveraged on the strength and international partnerships of Zinox to salvage Nigeria’s voter registration exercise by delivering 11,500 DDC (Direct Data Capture) machines in 14 days for the 2007 polls. That marked an epochal introduction of technology into the nation’s electoral process and ended the duplicity that hallmarked the voter register in the past.

He repeated the same feat in 2011 when he delivered 80,000 fully integrated units of DDC machines within 35 days ahead of two foreign companies just in time for the conduct of the general elections of that year much to the relief of then INEC chairman, Professor Attahiru Jega.

Though a successful entrepreneur, but he’s quick to tell you he’s not mindful of the balance sheet, but is concerned more by the value he adds to humanity. He tells you he’s not driven by profit but by empathy for mankind and it shows in the manner he strives to wipe away tears from those who weep and give food to the hungry. A very silent philanthropist, he has built a collateral of integrity over the years which has earned him respect from global players in the ICT agora.

For his ceaseless efforts to help in building a better Nigeria not just by creating jobs but by creating the milieu and technology that make it possible for Nigerians, especially the youths, to claw their way into the complex computer technology marketplace where they have brought honour to the country, Leo Stan has been rewarded with a couple of national medals. President Muhammadu Buhari in 2019 honoured him alongside Aliko Dangote and others with the National Productivity Order of Merit (NPOM) award. President Obasanjo also on October 1st 2001 named him ‘Icon of Hope,’ a symbolic emblem that speaks to his birthing of a new threshold of hope for the nation and her teeming youths.

All this in addition to the Order of the Federal Republic (OFR) national honour, Microsoft Global Adviser, dozens of national and international awards and several honorary doctorate degrees (Honoris Causa) from Nigerian universities.

On the occasion of his 65th birthday, let’s toast to an entrepreneur, patriot, statesman, nationalist and passionate believer in the Nigeria project. Happy birthday to a man whose values are propped up on the ramparts of integrity, fairness, justice and love for all without discrimination.