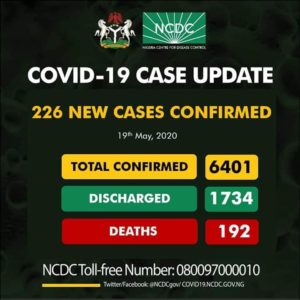 NCDC update as at May 19

A medical doctor has tested positive for COVID-19 in Bayelsa, bringing the number of active cases in the state to two, Gov. Douye Diri has announced. The doctor was among the 226 fresh cases recorded nationwide.

Diri confirmed the case on Tuesday at the Government House, Yenagoa, during a meeting of the COVID-19 taskforce, which he serves as Chairman.

A news release by his Acting Chief Press Secretary, Mr Daniel Alabrah, quoted the governor as saying that the doctor, a staff member of the Federal Medical Centre in Yenagoa, was earlier admitted at a private hospital before he tested positive to the virus.

Meanwhile, the Nigeria Centre for Disease Control (NCDC) on Tuesday recorded 226 new cases of COVID-19 in the country, bringing the total number of infections in Nigeria to 6401.

One patient was confirmed dead in the country, bringing the total number of deaths to 192.

The health agency explained that most of the fatalities recorded from COVID-19 were cases with other underlying illnesses known as co-morbidities.

It advised Nigerians to trust the health authorities and take responsibility to control the spread of the outbreak.

I’m committed to protecting all parts of ...