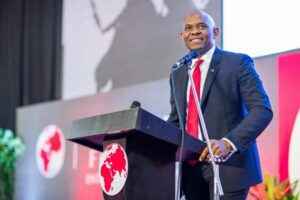 The Chairman of the Senate Committee on Ethics, Privileges and Public petition, Senator Ayo Akinyelure, had alleged that UBA defrauded NITEL of about N41 billion from N42 billion that liquidators of the telecoms company deposited at the bank after being sold to MTEL. The allegation was made on the grounds of petitions forwarded to the Senate to that effect by J .U Ayogu and Co, on behalf of NITEL/MTEL .

Senator Akinyelure told journalists that UBA made unauthorised withdrawals from the accounts of the liquidated telecoms companies four times and technically stole N41 billion out of the N42 billion that liquidators of the firm deposited there .

The senator alleged that UBA withdrew N29 billion , N11 billion, N6.8 million and N22 million at different times between 2006 and 2015 from the accounts without relevant tickets or authorisations for that purpose. And liquidators of the firm explained further in the petition that officials of UBA have been hiding under a litigated N685 million it withdrew from the accounts.

However, Mr Elumelu’s lawyers, Lawal Rabana and Oluwakemi Balogun, have described the allegation as false, baseless, and mischievous as neither him nor any of the organisations associated with him has ever been involved in or indicted for any fraud as was falsely alleged by Mr Akinyelure.

Elumelu’s lawyers insisted that the case is subjudice and rejected Mr Akinyelure’s “attempt to use the platform of the respected institution of the Senate of the Federal Republic of Nigeria to accomplish whatever ulterior motives he may have.

“It is important to emphasise that when UBA appeared before the Senate Committee on Ethics, Privileges and Public Petitions, attention was drawn to the fact that the facts and circumstances leading to the disputes on the alleged financial indebtedness was pending before the Supreme Court in SC/CV/112/2020. It was resolved that given the pendency of the matter at the Supreme Court, it was subjudice and all actions on the matter be suspended.

“It is shocking and sacrilegious that a matter pending at the Apex Court could be subjected to debate contrary to the Rules of the Senate and by extension, the principle of law that when a matter is subjudice, it should not be subjected to debate before a decision is reached by the Court. Therefore, the publications ascribed to Senator Ayo Akinyelure is in total disregard of the Rules of Senate and the Rule of Law,” part of the letter read.

The lawyers demanded an immediate open, public and unreserved retraction of the statements by Mr Akinyelure and an apology.

“Our Client has instructed us to and we have demanded an immediate open, public and unreserved retraction of the said statements credited to Senator Akinyelure and an apology from Senator Akinyelure for this false allegation and defamation of our Client.

“We have our Client’s further instructions to take all appropriate legal actions against Senator Akinyelure and his media agents if our above stated demand is not met within Seven (7) days of their receipt of our demand letter.”

Some persons conversant with banking rules told Political Economist that no bank would unilaterally withdraw the stated amounts from a client’s account without authorisation as alleged by the senator and petitioner.

One of our respondents, Mr. Kingsley Obiekwu, an investment banker and economist, said the petitioners may not have done a proper due diligence before coming to town with the allegation, wondering how a bank could cream off such humungous amount from the account of its client without authorisation as alleged.

“It is difficult to make head or tail from the said allegation. No bank can dip its hand into the account of a client and cream off the amounts mentioned without authorisation from such client. Not even at the top level of the bank will such happen,” he told our reporter.

He said the weakness of the due diligence makes it imperative for Elumelu to go to court to clear his name.