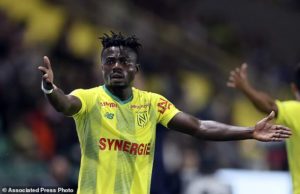 Nantes said in a statement that it took up the option to sign him after he impressed on a season’s loan from Levante. Reports said Nantes paid 5 million euros ($5.6 million) for the 24-year-old forward, who scored nine goals and had eight assists in 30 games.

A quick, direct and skilful player, Simon was appreciated by Nantes fans and established himself as one of the best wide players in the league.

Our strike is for better benefits, says ...