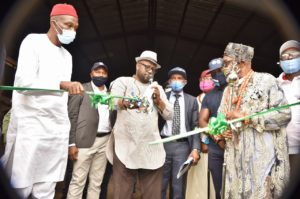 The Niger Delta Development Commission (NDDC) has begun distribution of medical supplies and relief materials to nine states under the commission to cushion the effects of the Covid-19 pandemic.

NDDC acting Managing Director, Prof. Kemebradikumo Pondei, flagged-off the exercise in Port Harcourt, according to a statement by the commission’s Director of Corporate Affairs, Charles Odili, on Friday.

Pondei said the commission had already donated funds to the nine Niger Delta state governments to purchase medical equipment and palliatives to distribute to residents in their various states.

“Funds given to the states were utilized for the procurement of medical equipment, such as special diagnostic equipment and critical care equipment like ventilators and consumables.

“Others are various food items, beverages, sanitary materials and disinfectants. In addition, funds were also given to women and youth groups as palliatives.

“We also gave support to the physically challenged with wheelchairs and crutches as well as funded sensitization and public enlightenment campaigns in the Niger Delta,” he said.

The managing director said the commission was also ready to support the state governments by providing quality healthcare services to mitigate the spread of the virus.

“We know that the disease has affected the socio-economic wellbeing of the people, especially as most small and medium scale businesses have been affected with the lockdown in the states.

“NDDC looks forward to strengthening relationship with the states in the area of healthcare and wellbeing of residents.

“The good relationship between state governments in the region offers opportunity for synergy to providing lasting solution to the socio-economic challenges of people in the region.

He however, warned against using NDDC as a breeding ground for power play by some politicians.

Also speaking, the Amamgada XII of Rebisi, Eze W. Akarolo described NDDC intervention in the fight against Coronavirus pandemic as a right step in the right direction.

On his part, a Niger Delta youth leader, Jonathan Lokpobiri, expressed gratitude to President Muhammadu Buhari for offering support to the region.

Lokpobiri urged the NDDC management to focus only on regional development. (NAN)

How Not to Police a Pandemic