All you need to know about Haspil, alleged killer of Gokada CEO Fahim Saleh 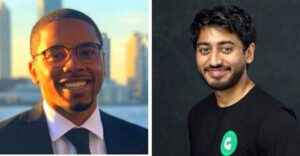 He was identified as a person of interest in the death of Saleh, who was found murdered in his New York City condo on Tuesday.

Haspil was arrested and charged with murder on Friday.

Surveillance video inside the building captured Saleh stepping into the elevator on Monday at approximately 1.40pm.

The footage reportedly shows his alleged hit man – wearing a black suit, a hat, a black mask, and gloves – following him into the elevator.

A source with the NYPD told NBC News that the suspect had a suitcase and the victim fell to the ground as soon as he got out of the elevator.

Footage showed that he appeared to be attacked when he got off the elevator, which opens up to into his apartment.

The body was cut with a power saw, which cops found at the scene and was still plugged into an electrical outlet.

“We have a torso, a head that’s been removed, arms, and legs,” NYPD spokesman Sergeant Carlos Nieves told The New York Daily News.

Barely any blood was found at the scene and nothing was stolen at the apartment, prompting one source to think that the suspect had been “interrupted,” the Post reported.

One of Saleh’s friends told NBC that: “One of the neighbors heard screaming and very loud noises when this happened. I don’t know why the neighbors didn’t call the cops.”

How much money did Haspil allegedly steal from Saleh?

Haspil was suspected of embezzling tens of thousands of dollars from Saleh, according to the New York Times.

Saleh had not reported him to the cops and had set up a repayment plan for him to return the money, an official told the newspaper.

Law enforcement officers told the Daily Beast that they turned to Haspil after finding messages where Saleh accused him of stealing the money.

They also told the outlet that, after running a credit-card check, they found out that Haspil’s card was used to buy a saw and cleaning products as well as rides to and from the crime scene.

When was he arrested?

Haspil was arrested Friday and is expected to be charged with second-degree murder and other crimes.

Who discovered his body?

Saleh’s sister had stopped by his apartment to do a welfare check after she had not heard from him in a day.

It is unclear which sister found him dismembered and decapitated.

His body was discovered around 3.30pm.

She discovered his torso in an area next to the living room.

Apparently, the killer was alerted when his sister entered the apartment.