Nigeria: Portrait of a nation in bloody tears 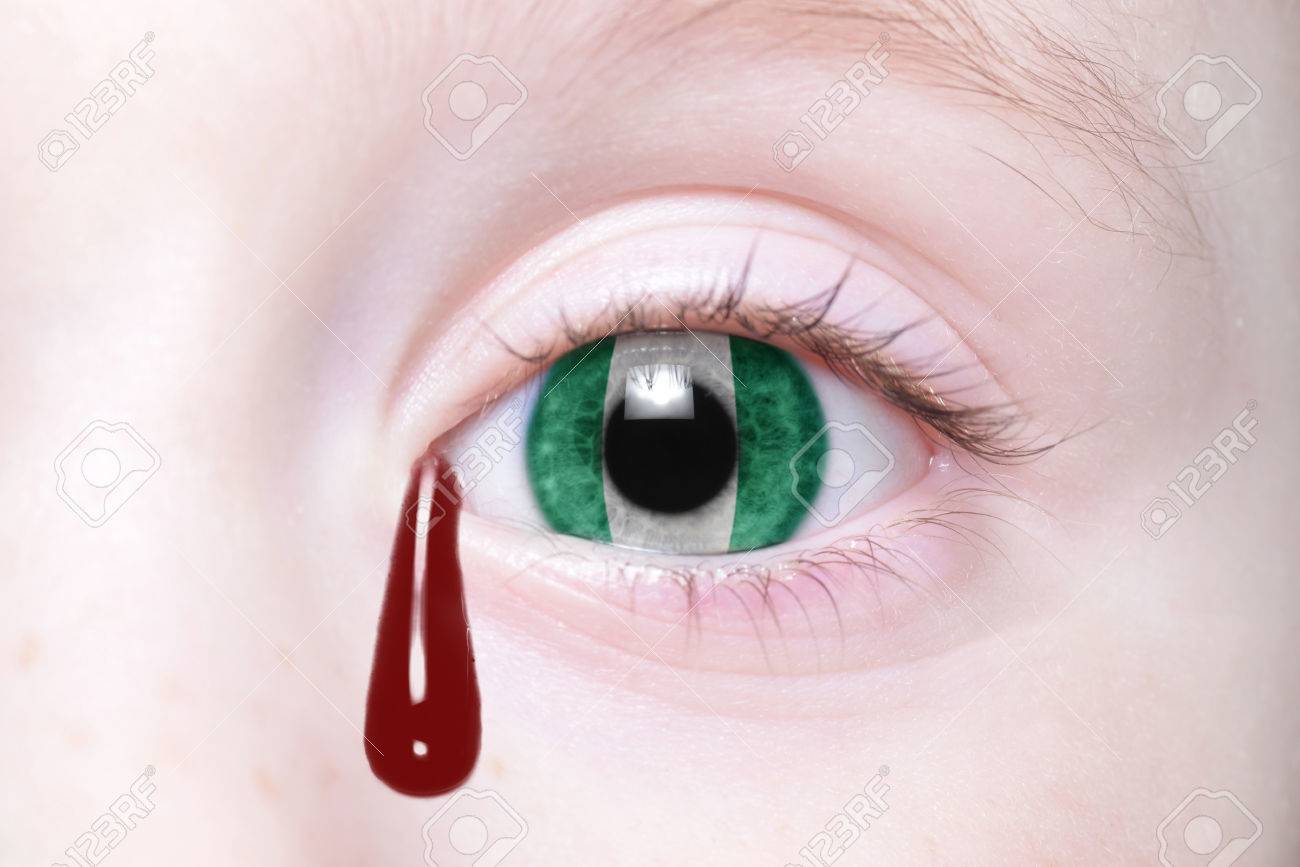 Nigeria: Portrait of a nation in bloody tears

The nation sunk deeper into the abyss of despondency under Buhari. He has scored an all-season high in nepotism; an all-time low in economic management. And he, by himself, herded the nation to the crudest level on insecurity

Were Nigeria a man, he would be one hell of an irresponsible man, a self-indulgent binger, wayward in all his ways. An imprudent brute given to fiscal rascality. Born rich with overflowing abundance of inheritance, but his proclivity to pecuniary recklessness and wanton appetite for vanity rendered him poor; indeed perilously poor. And to satiate his vaingloriously voluble appetite, he went on a borrowing spree which subsequently rendered him broke and in great debt.

He would be such a man, though married with many children, but never cared about the welfare of his family. He would be that Biblical man who cannot provide for his family. The Bible described him as “worse than an infidel.” A man without honour among men, stripped of his manliness; shorn of grace. A perniciously pathetic vagrant; homeless in his own home. Such would be the motif of the man called Nigeria. And such is the state of the nation. A country unable to pull herself from the tethers of underdevelopment. Manacled to the stump of ethno-religious variance. Tormented by terror. Burdened and hunching over under the distressing weight of irresponsible leadership.

In six decades plus one year of self-rule, Nigeria has dithered from brink to brake. Teetered like a drunken dotard from the rim of restiveness to the brim of despair. A sorry state; the butt of jokes among nations. A pariah in the pavilion of nationalities whose citizens move to other nations in droves and she does absolutely nothing to stem the tide. Nigeria would be a deep-rooted and unrepentant masochist, steeped in self-flagellation. A man who hurts himself, enjoys the self-inflicted pain. A schizophrenic boor, laden with heavily built muscles but buckles at the whimper of the owl. A man of paradoxes, contradictions and incongruities. A man so rich, yet so poor. So blessed, yet without the benefits of blessedness. Endowed but empty. A man of existential extremes. Imagine a man, a family man, who borrows for Owambe yet his children are out of school. That’s the portrait of Nigeria.

It’s convenient to heap the blame on the shoulders of President Muhammadu Buhari. But it’s not entirely his fault. The rot had set in long before the retired General dropped his Khaki for Agbada. It’s not because of Buhari that Singapore, South Korea, Malaysia and other nations that were looking up to Nigeria in the 1960s have overtaken her in 2021. It’s not because of Buhari that Nigerians, including the so-called lettered and learned, do not obey traffic light or even bother to conform to basic traffic rules.

The state of the nation has been pitiable. Once it was thought that Chief Olusegun Obasanjo would fix Nigeria, repair the breaches, clear the mess of corruption – a palpable signature of the military – but he failed. He came with a grand vision, no doubt. He established anti-corruption agencies (EFCC and ICPC), gave life to deregulation of key sectors birthed by the military regime of Ibrahim Babangida. Under Obasanjo, telecoms sector revved to a revolutionary timbre. But the same Obasanjo lacked the discipline to extricate himself from corruption and its tendencies. Bribery of National Assembly members, pillaging of public tills including the purse of the Petroleum Technology Development Fund, PTDF, among others hallmarked his tenure. Plus, he fell to a scam by his bootlickers who convinced him to cleave to the lever of power in a curiously contrived Third Term agenda. By the time he reluctantly left office in 2007, he left behind cracks and craters in the psyche of Nigerians. He never won the war against corruption. The disease festered.

Both Umaru Yar’Adua and Goodluck Jonathan showed no spunk. Both operated on the premise of weakness. While Yar’Adua may be excused on account of ill-health (though he lacked the honour to resign or lawfully transmit power to his deputy thus creating a dire constitutional crisis), Jonathan had no excuse not to fix a broken nation that he inherited. Indeed under Jonathan, the nation was in nervous state. Corruption grew more teeth. Terror struck from Borno, sending its ripples throughout the north east and Abuja. An obviously weak Jonathan was more concerned about his own safety inside Aso Rock than the safety of the over 190 million Nigerians under his care. Boko Haram became daring, bombed churches, bombed Abuja, kidnapped over 200 Chibok secondary school girls. Fright barbed the soul of the nation.

And Nigerians, thinking they had seen the worst, opted for CHANGE! Buhari was that CHANGE. He was thought to be the messiah. Never mind that under Jonathan, Buhari manifested obvious signs that gave him away as a sympathiser and patron of the terrorists. Yes, the state of the nation under Jonathan was bad but under Buhari, it has become horribly atrocious, simply insufferable. Under Buhari, Nigeria officially became a top-ranking terror nation. Footages of terror and its mongers which Nigerians saw coming out from Iran, Iraq and Afghanistan became daily menu from Nigerian media. Under Buhari, it’s easier to fetch a bucket full of human blood than it’s to fetch a bucket of potable water. Even the chief supporters of Buhari and their recruits of cheerleaders have turned chief mourners in the daily expanding national graveyard. Hailers have become wailers.

And why not? The current state of the nation is Hobbesian – “solitary, poor, nasty, brutish, and short.” A horror movie. Nigerians have become used to horror, some are even numb. Terrorists have discovered a lucrative market in Nigeria. And from Niger, Mali, Chad, Cameroon, they come. Armed with RPGs (rocket propelled grenades), AK-47, bombs, they take refuge in our forests. Kidnap our children, mothers, fathers, brothers, sisters for cash. They kill, they maim, they rape. I wager that Buhari is not aware that terror has taken hold of the nation; that no part of the country enjoys immunity from the scourge of terror. Every day is a horror script, a choreographed feast of fatal fantasy. Death stalks the land. Buhari condoles the people. The Commander-in-Chief has become the Condoler-in-Chief.

The state of the nation is not smiling. No joy, no mirth. All pain. And to add to the menu of insecurity, cost of goods and services have taken flight to the roof in a brazen catch-me-if-you-can. But Buhari must not continue to shy away from his responsibility. A man who inherited an already broken nation must of necessity work intentionally and deliberately to fill up the cracks and crevices. President Buhari must in his quiet moment ponder the state of the union. It’s a broken nation in dire need of redemption. The nation sunk deeper into the abyss of despondency under Buhari. He has scored an all-season high in nepotism; an all-time low in economic management. And he, by himself, herded the nation to the crudest level on insecurity. But Buhari can help himself. He must stop his all-is-well pretence. How many more Nigerians can we sacrifice? How much more blood can the terrorists shed while the man of the house looks away. This man called Nigeria has become most irresponsible under Buhari than at any time in history. This should worry Buhari. He’s making history in the wrong direction: Nigeria’s bloodiest president. It’s not a badge of honour, but a epaulet of shame.