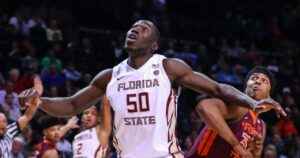 Former Florida State center Michael Ojo collapsed and died on Friday. He was 27. Florida State confirmed the passing of Ojo, who was overseas in Belgrade, Serbia. Multiple reports said Ojo collapsed during an individual practice session and could not be resuscitated at a local hospital.

Eurohoops.net reported that Ojo died of a heart attack.

The 7-foot-1 Ojo had played three professional seasons in Serbia.

“In all of my years of coaching, I’ve never been around a person who captivated the emotions of everybody he came into contact with like Michael,” Hamilton said in a statement to the Tallahassee Democrat. “He had to be the most popular person in Tallahassee, and, certainly at Florida State University.

“Michael Ojo was a wonderful, wonderful human being. He was a great teammate and really represented what the Seminole spirit is all about. He was one of the purest Seminoles that I have ever been around; he will be missed tremendously by the whole Seminole nation.”

Edo polls: The warlike approach of the ...