NNPC: Our recent appointments based on merit, competence 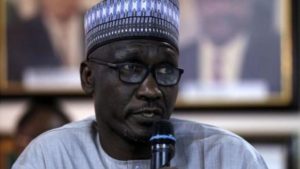 The Nigerian National Petroleum Corporation (NNPC) says professional competence, adherence to the principle of transparency and accountability informed the recent top management appointment effected in the first week of March.

Dr Kennie Obateru, the spokesman for the corporation made this known in a statement issued in Abuja, on Sunday.

The corporation in March disengaged some of its staff and appointed new top management staff.

The appointments elicited criticisms from some Nigerians and some Niger Delta leaders.

Obateru explained that the principle of federal character was also a factor in the progression of the new appointees.

He said many top management officers of the corporation were moved to new positions, while some were promoted based on their verifiable track records of performance.

“Some Chief Operating Officers, Group General Managers and Managing Directors of subsidiaries were affected in what some industry analysts described as the most objective placement exercise in the recent history of the National Oil Company.

Topping the list of the changes, he said, was the re-deployment of the erstwhile Chief Operating Officer (COO), Upstream, Mr Roland Ewubare, to the Ventures and Business Development Directorate as COO.

He said that under the arrangement, Ewubare, got an additional responsibility of business development, besides managing the group’s ventures.

He noted that Adetunji was a first-class Mechanical Engineering graduate of the University of Lagos and started his over 30 years career as a maintenance Engineer and later a project Engineer in Lever Brothers Nigeria Limited (Unilever).

Obateru said  that the recent top management appointment also received affirmative action with the re-deployment of Ms Lawrencia Ndupu to the Downstream.

He said that Ndupu was a Physicists and renowned explorationist and started her working career in NNPC in January 1986, adding that through the years, she has held many key positions.

Obateru added that Mr Bala Wunti, the erstwhile Managing Director of the Petroleum Products Marketing Company was appointed as the new GGM of the National Petroleum Investment Management Services (NAPIMS).

“With a chain of experience spanning close to 30 years, Wunti who hailed from the North East, was the initiator of ‘Operation White,’ a system put in place to promote transparency and accountability in the distribution of petroleum products across the country.

“The list also included Mr Lawal Sade as the new Managing Director of the NNPC Trading Company, a subsidiary of corporation.

“Before then he was the MD of NIDAS, a shipping arm of the NNPC. Mr. Sade had been essentially a marketer in the last 20 years with impressive outcomes.”

Obateru stated that the exercise kept in place Mr Adokiye Tombomieye, from the South-South, as Group General Manager, Crude Oil Marketing, a highly strategic position in the corporation.

The NNPC spokesperson explained that the new appointments depicted a leadership of the corporation determined on ensuring placement of square pegs in square holes.

He said this was done while not losing sight of geographical spread, in respect of staffing. (NAN)

How Pantami chased NiDCOM staff away from ...