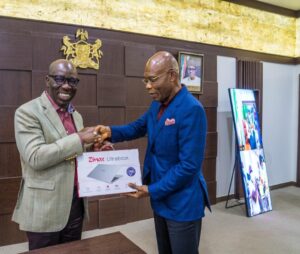 Governor Godwin Obaseki of Edo has expressed his delight at the opportunity of working with Zinox, Nigeria’s leading tech giant as a technology partner in the state’s transformation programme.

Obaseki made this known during the formal signing of a partnership agreement between the Edo State Government and Zinox held at the Government House in Benin City, the Edo State capital on Monday, October 11, 2021. 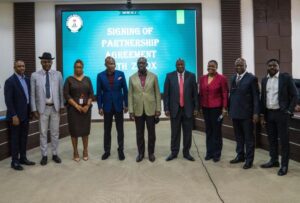 The event had in attendance the Chairman, Zinox Group, Leo Stan Ekeh as well as other Management Executives of Zinox, with the Edo State Government represented by Obaseki, as well as other members of the State Executive Council, including the state’s Attorney General and Commissioner of Justice, Prof. Yinka Omorogbe, among others.

Speaking during the signing ceremony, Obaseki hailed Zinox which he described as an indigenous technology leader and a fitting partner in its journey of state reforms led by a renewed embrace of digital technology. 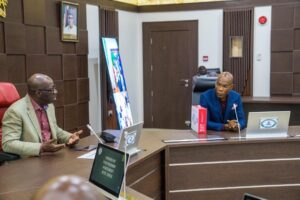 ‘‘I have always said it that the private sector will remain sub-optimized without a virile public sector. Our goal is to transform our state into a very modern, progressive state. But there is no way you can pursue this agenda without using the tools of technology.

‘‘The superstructure on which the reforms we are driving is anchored on is technology. Our demographics is very youth-centric, we love to travel, so we have a certain level of exposure as a people. So, we just found out that technology helps us to put it all together. In reflecting on technology, the beautiful thing is technology is global. We also have to make it global. But to localize technology with global standards, you need partnerships locally that have these in-built standards.

‘‘We’ve looked around and we are fortunate that we have a Zinox in Nigeria,’’ he disclosed.

Continuing, Obaseki revealed that the plan is to ensure that every member of the public and civil service in Edo State owns a minimum of one PC or laptop, which he noted would boost their efficiency, while also aiding them work from home.

‘’If we are going to achieve the greatest we can achieve as a state that we wanted to have in development via technology, then we need to have the best technology partner in all of Africa. We are transforming enviably every area of the state. We have developed an e-learning approach and spent the last one year diligently reviewing our system, processes and procedures, while also recruiting a new generation of civil servants, training them, teaching them and attracting people from the private sector to join government so that we can now change that culture of service delivery. Nothing can put all of these together in a transparent manner other than technology.’’

Also speaking, Ekeh, Chairman, Zinox Group, commended the Edo State Government for setting the pace in its adoption of technology as a tool for reforming the state and in raising the bar of service to world-class standards. He noted that his recent visit to the state was an eye-opener, even as he reiterated the commitment of his tech group in working with the state to achieve its transformation agenda.

‘‘The Zinox Group has done so much in the area of technology including a number of pioneering efforts across the continent. We are happy to be working with the Edo State Government to deploy the power of digital technology in empowering the citizens and transforming the state.

‘‘I must commend the governor and his team for their vision and the efforts in this regard. Edo state is blessed with a number of smart youths and on arrival today, I interviewed some of them and already hired one. It is interesting also to see that the government is attracting its citizens back home, even from abroad. So, it means that they are doing something right,’’ Ekeh stated.

The highlight of the partnership signing ceremony was the presentation of an UltraBook device designed and assembled locally by Zinox. The device, one of the cutting-edge devices in the Zinox stable, was unveiled by Ekeh, who presented it to Obaseki as a parting gift.