British police said on Sunday they were dealing with an incident aboard an oil tanker, Nave Andromeda, near the coast of the Isle of Wight, an island off the southern coast of England, and British media said a small number of stowaways had been found. 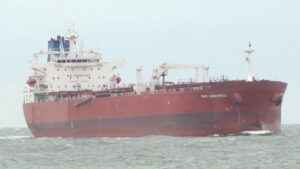 Two sources with knowledge of the situation said the vessel was the tanker Nave Andromeda.

Sky News said up to seven stowaways had been discovered on board, and broadcast live images of the ship. The BBC cited lawyers for the ship’s owners as saying it was “100% not a hijacking.” Reuters has contacted the owners for comment.

Police did not immediately confirm details of the incident to Reuters. Britain’s interior ministry, which is responsible for border control, did not have any immediate comment.

The local police force said in a statement, “We are aware and dealing with an ongoing incident on board a vessel which is situated south of the Isle of Wight.”

The coastguard agency said search and rescue helicopters were attending the incident but did not give details.

Refinitiv vessel tracking data showed the Liberia-flagged Nave Andromeda had been expected to arrive in the English port of Southampton at 1030 GMT on Sunday. The vessel had departed from Lagos, Nigeria, the data showed.

The Nave Andromeda’s registered owner is Folegandros Shipping Corp, and the vessel is managed by Greek shipping company Navios Tankers Management Inc., according to Refinitiv.

A spokesperson for the UK Chamber of Shipping said: “We are aware of an incident onboard the Nave Andromeda off the Isle of Wight and are in contact with the relevant authorities. We believe it is likely to be related to stowaways onboard but are awaiting more information.” Lawmaker Bob Seely, who represents the Isle of Wight constituency closest to the vessel, told Sky News he expected the incident to be handled by marine counter-terrorism forces, but that it was too early to call it a hijacking.

In December 2018 British forces stormed an Italian cargo ship and regained control after stowaways threatened crew members as it sailed close to the coast of southeast England.

Why I donned #EndSARS T-shirt: Formula One ...