Seven Nigerian stowaways seized in a daring operation by special forces risk lengthy jail terms for hijacking an oil tanker. The suspects were detained under maritime laws which carry a maximum sentence of life imprisonment. 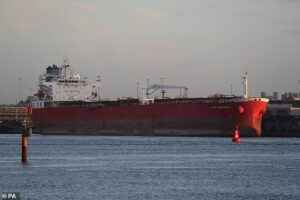 They had allegedly threatened the 22-man crew of the 42,000-ton Nave Andromeda which was heading to Southampton from Lagos in Nigeria.

Special Boat Service commandos stormed the tanker off the Isle of Wight on Sunday evening after the ship’s terrified captain radioed for help, reports The MailOnline.

The unnamed mariner said in broken English on an open radio channel: ‘I try to keep them calm but I need immediately, immediately agency assistance.’

He added that two intruders were on the starboard side near the bridge, although they had not managed to gain access.

In other radio messages the captain is reported to have said he feared for his life, and those of his crew.

The Greek-owned tanker, that flies the Liberian flag, had left Lagos on October 5, where the stowaways ‘illegally boarded’ the vessel, a spokesman for operator Navios Tanker Management said.

A source close to Miss Patel said the 45 minutes during which the situation was resolved ‘felt like 45 hours’.

The heavily-armed troops descended on to the tanker by rope from four Royal Navy helicopters after nightfall.

The elite soldiers quickly rounded up the suspected hijackers and ended their mission after just nine minutes.

The seven suspected hijackers seized on Sunday night were last night being questioned in separate police stations across Hampshire after the 750ft tanker moored at Southampton.

A spokesman for Hampshire Police said: ‘It was reported that a number of stowaways were on board, and they had made threats towards the crew.’

He added: ‘All 22 crew members are safe and well and the vessel is now alongside in the port of Southampton. Investigators are speaking to the crew members to establish the exact circumstances of what happened.’

Bob Sanguinetti, chief executive of the UK Chamber of Shipping, said: ‘I think this has got all the hallmarks of a situation where a number of stowaways are seeking political asylum, presumably in the UK.  At some stage they got aggressive. Clearly no one knew at the time how aggressive they were, whether they were armed or not and what their motives were.

‘In the discussions taking place between the ship’s captain and the authorities in the UK – both police and the military – they will have decided at some stage the least risky option was to board the vessel using the special forces.’

What will the police do now?

Police will build a picture of the alleged hijackers’ activities aboard the Nave Andromeda. They are also likely to study electronic systems which record communications aboard the vessel and from ship-to-shore, known as a Voyage Data Recorder, or VDR, similar to the ‘black box’ aboard commercial aircraft.

What’s the law on hijacking and piracy?

The seven were arrested under Section 9 of the Aviation and Maritime Security Act 1990, which deals with hijackings. The law states: ‘A person who unlawfully, by the use of force or by threats of any kind, seizes a ship or exercises control of it, commits the offence of hijacking a ship.’

Richard Neylon, an expert in maritime law from law firm HFW, said: ‘If you try to seize control of a vessel and you have no business being aboard that vessel, the threshold is quite low under this legislation.’ The maximum sentence under the legislation is life imprisonment.

What could happen to the suspects?

Regardless of whether the Nigerians are charged with any crime, their removal from the UK is unlikely to be swift. Previous cases have shown hijackers were able to successfully challenge the Home Office.

For example, in February 2000 nine Afghan men hijacked an Ariana Afghan Airlines Boeing 727 and forced the pilot to land at Stansted. A siege involving the hijackers and 187 passengers and crew lasted five days. The hijackers were jailed but their convictions were later quashed.

In 2006, they brought legal action which allowed them to stay in Britain.

What happens to other Nigerian asylum seekers?

There were 1,279 asylum applications by Nigerians decided by the Home Office in the year to March – but the majority were refused.

Only 398 led to grants of asylum or other leave to remain, or just over 31 per cent. The rest were refused or withdrawn, Home Office data shows.

It is unclear how many of those who were refused were removed from the UK.

According to a research paper by the House of Commons Library, there were just over 26,000 asylum applications from Nigerians decided across the European Union during 2019.