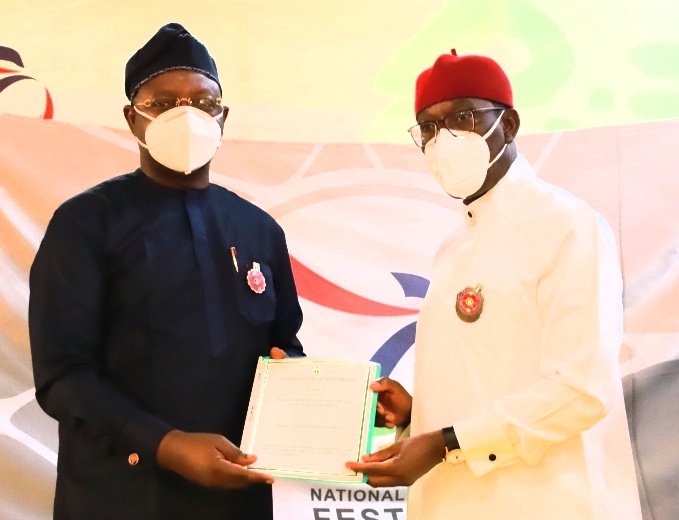 Delta Governor,  Dr. Ifeanyi Okowa, on Monday, called for more investments in sports development and management in Nigeria to enable the nation maximise the potential and rich pool of talents for national development.

The Governor also expressed readiness of the state to host the 2022 (21st) National Sports Festival, bragging that Delta now has excellent sports and hospitality facilities that have made it the preferred destination for organisers of major meetings, competitions and gatherings.

Okowa who made the call in his remarks during the Extra Ordinary National Council on Sports Meeting held at the Unity Hall, Government House, Asaba, said attention seems to have focused primarily on football and, to some extent, athletics, to the neglect of other sports.

According to him, there is no such thing as a minor sport; they are all very important and have the strong potential to lift our youths from poverty to prosperity and earn valuable foreign exchange for the country.

For instance, he said, golf is reputed as the richest sport in the world, yet it is hardly played in this part of the world except by the rich and powerful for recreational purposes.

Okowa stated that the state government was pleased to host the Extra Ordinary Meeting of the National Council on Sports, adding that the state capital, Asaba, has in recent years, become a preferred destination for national conferences and events owing to its rapid urbanization and quantum leap in the hospitality industry.

He expressed hope that the meeting would develop policies and action plans to maximise the contribution of sport to national development, pointing out that aside from its entertainment value, sports has the proven capacity to teach participants life skills in a fun and enjoyable atmosphere.

“It has the power to imbue the youth with the values of discipline, teamwork, fair play, leadership, healthy living, communication, and continuous improvement, essential qualities needed to succeed in life.

“Sport is also a powerful medium to weld national unity. Indeed, when appropriately harnessed, funded, and utilized, sports can bring about positive outcomes in the economy, health, education, and social cohesion.

“For that to happen, strategic planning is required. I believe there is an urgent need to carve a road map for sports development and administration in the country;

“Such a road map must be perfectly understood by policy makers, administrators, and officials, have measurable goals, and contain an equitable reward system that will motivate the athletes,” he said.

On the national sports festival, the governor said the government and good people of the state were eagerly looking forward to hosting the 2022 edition of the sports fiesta which, according to him, is one of the decisions that is expected to be ratified at the extra-ordinary meeting.

He, therefore, assured the Minister of Youth and Sports Development and other members of the National Council On Sports that the state was poised to host the best National Sports Festival saying that the state has the needed infrastructure, industry, facilities, personnel and experience to make the nation proud.

“In 2018, within months of completing the Stephen Keshi Stadium, we hosted the 21st African Senior Athletics Championship, tagged Asaba 2018.

“It is fair to say that Asaba 2018, which held from August 1-5, 2018, surpassed the expectations of the Local Organising Committee and even the Confederation of African Athletics.

“For the first time in the 39 years history of the competition, there were 52 countries that took part, five more than the previous record of 47. The tournament also featured a record number of 800 athletes while the number of events competed for rose from 44 to 46,” the governor said.

Earlier in his address, the Minister of Youth and Sports Development, Chief Sunday Dare said the Extra Ordinary Meeting of the Council was to deliberate and approve the recommendation received from the technical session as well as to enable the ministry and the host state draw timeliness of activities for the conduct of a successful sport festival .

Chief Dare disclosed that a Department for National Sports Festival and Para -Sports has been established in the Federal Ministry of Youth and Sports Development.

He charged members of the Council on Sports to come up with fruitful resolutions for the development and progress of sports in Nigeria, even as he expressed appreciation to the state governor Senator Okowa for providing the necessary logistics for the meeting.

“At the Federal Ministry of Youth and Sports Development, we are beating a new path, traveling a road less travelled.

“From the reclassification of sports as business and the reviewed National Sports Industry Policy (NSIP) now in its final clearing stage, to the efforts to bring back the National Sports Commission (NSC) in order to refit our sports federations.

“Funding, autonomy is now being considered. Athletes welfare is now top of the agenda. New ethics document now in the works that sets out procedures and benched against best practices,” Chief Dare said.

Highlights of the ceremony was the inauguration of a 17-man Local Organising Committee (LOC) headed by the Secretary to the State Government (SSG), Chief Patrick Ukah by Governor Okowa and signing of the 21st National Sports Festival Memorandum of Understanding, (MoU) between the Federal Ministry of Youth and Sports Development and the Delta State Government as well as the presentation of the hosting flag which signifies the hosting rights to Governor Okowa.