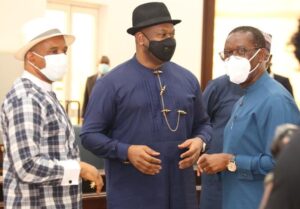 Okowa stated this when the Director-General of NIMASA, Dr Bashir Jamoh and his management team visited him at Government House, Asaba.

He commended the management of the agency for reaching out to stakeholders in the littoral states in its determination to develop the maritime sector.

He said that the take-off of the Maritime University in Okerenkoko had brought peace to the Niger Delta and pledged the support of the state government to the growth and development of the university.

The governor acknowledged that NIMASA has done well in Delta, but needed to do more to enable the state reap the dividends in the maritime sector.

According to him, “I appreciate the effort of NIMASA in the establishment of the Maritime University in Okerenkoko. The school should be developed to international standard because of its uniqueness and for it to produce adequate manpower needed in the maritime sector.

“Indeed, the coming of the university gave birth to peace in the Niger Delta and we must appreciate NIMASA for its contribution.

“I am aware that we have been having issues with the ship repairs and building project and we will be happy to see this industry established to complement the university.

“We are aware that a lot of scholarships have been given to Deltans and I must register our appreciation to NIMASA,” Okowa said.

He called for the opening up of the nation’s ports because of their importance in economic development and job creation, saying “a well-developed maritime business has the tendency to address major challenges in the nation’s economy.

“Attention has for long been given to crude oil exploration and exploitation thus neglecting gas which has both long and short term gains to any nation that has it as a natural resource.

“Maritime industry is obviously very important to us as a nation and we can generate a lot of revenue from it, and it is my prayer that you will be able to get the much-needed support to develop the industry,” he added.

Earlier, Jamoh had said that he was in Delta as part of the stakeholders’ sensitisation on development of the maritime sector.

He said that NIMASA was determined to bring the littoral states as major stakeholders in the maritime industry, together for partnership.

He stated that Delta had benefited from three projects of the Agency in the last seven years and listed them as Nigerian Maritime University, Okerenkoko; NIMASA Science and Technical College, Okoloba; proposed Ship Repairs Industry and educational scholarship to over 1,000 Deltans to study maritime-related studies.

Jamoh, however, stated that insecurity was the major reason why ships avoid other ports in the country, but affirmed that NIMASA was already addressing the issue through the “Deep Blue Project”.