Okowa: When a leader listens…

‘Six years in office it’s obvious that Okowa has not stopped listening to people; he loves engagement with different audiences; he loves scouring through the social media space to get a feel of the people of Delta. Little wonder, in his first six years, Deltans are already singing his praises as the governor who has identified with the masses as much as he has with the nouveau riche across the state.’ 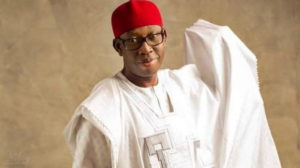 Ever wondered why Dr. Ifeanyi Okowa, the governor of Delta state does not easily grab the headlines on matters of politics as he does on development? Wonder no more. Reason is: Okowa is not given to oratorical flippancy. He’s the quiet, taciturn type, a man who would rather listen intently than gush into unrestrained talkativeness. He’s not the typical everyday Nigerian politician, long on verbose but short on development.

This attribute has also helped him as the governor of Delta, a state fabled for its rich repository of fecund minds, political juggernauts, flamboyant socialites, academic whizzes, science nerds, innovators and sundry masterminds. Delta is not a monolithic state. On the contrary, it’s a multi-ethnic state of liberal-minded, bohemian, street-smart and book-wise men and women. It’s Nigeria’s flourishing foundry for Pidgin English, spoken across the state by both the old and young. By the way, Pidgin English is assuming global recognition such that the Chinese, the English and others are beginning to take more than a passing interest – we now have BBC in Pidgin English and the Chinese taking lessons in this distinctive variant of the English language.

Therefore, to succeed as Delta leader (Governor), you must have tact, discipline, intellect and intuition. You must have the courage to dare, to do more and talk less. Above all, you must be a listening leader, not the free-talking type. In reality, it takes courage to listen and even more courage to act on what you hear.

It was Winston Churchill who once echoed this: “Courage is what it takes to stand up and speak; courage is also what it takes to sit down and listen.” Spot-on! It takes real courage to stay still and listen, even to the most banal of speakers. And this is the hallmark of great leaders. Successful people are usually associated with being great listeners and less talkers. In my few interfaces with Governor Okowa, I have come to realize that he is more of the reticent politician, a listening leader as against the jejune, cheap chatterboxes that have taken over the Nigerian political space. Such also abound in Delta: politicians voluble in speech and empty promises but very short in action and development.

Okowa listens. Okowa responds to requests including those posted on social media platforms. The requests range from appeals to the state government to fix a particular road or attend to a life-threatening situation in a neighbourhood. Those who put out such requests attest to the fact that few days or weeks after tabling their requests, the governor responded not in words but with action.

Each time you engage him in a discussion, he never listens with intent to reply; he listens with intent to know, to understand your mindset and by extension the mindset of the people; he listens to connect with the voices in the streets. Engaging Okowa is engaging a leader who dutifully listens to all voices, from the laudatory to the fiercest critic. In such ambience, you will notice the effort of a leader to empathise with the led.

Six years in office it’s obvious that Okowa has not stopped listening to people; he loves engagement with different audiences; he loves scouring through the social media space to get a feel of the people of Delta. Little wonder, in his first six years, Deltans are already singing his praises as the governor who has identified with the masses as much as he has with the nouveau riche across the state.

Okowa is a damned good listener. It is a rarity in leadership not just in the top echelon of the public sector but at every stratum of leadership even in the private sector. The leader ought not to be the one talking and tattling but the one listening and acting. A successful leader’s voice may not be heard from the distance but his presence fills the ambience even when he’s not physically present. Okowa seems to have mastered the art of leading by listening rather than the crude way of leading by talking. In the final analysis, it is the listener who does, who acts and translates vision to reality. The talking leader never does. He is conceited and consumed in his delusionary state of ‘I know it all’. A good leader understands what the people need because he listens to them; a poor leader only understands what he thinks the people need because he never listens to them.

Recently at a virtual colloquium to mark a friend’s birthday, the issue of leadership by listening became the crux of a heated debate.  Most Deltans participating at the event cited Okowa as their contemporary example of a listening leader. They named schools and roads that enjoyed a total makeover when they brought their sorry state to the attention of the governor. Some from far flung riverine communities attested to the fact that they now have bridges linking their communities to the larger Delta and to the outside world just because they tabled them as their request when Okowa visited their communities to campaign for votes on the occasion of the two elections that brought him to office. For some, it’s the re-modelling or upgrade of schools in their communities. For yet others, it’s healthcare, cottage industries, or upskilling of human capital.

All this in a season of national austerity occasioned by a global health and economic pandemic. Some have, rightly, tagged Okowa ‘stingy and tight-fisted’ but it’s only so because there’s so much to be done across the multi-city state including building infrastructure in the creeks and communities therein with very meagre resources. A leader who thinks development and is intent on delivering same cannot afford the fiscal bazaar that attended leadership among some African leaders, from the ancient to the contemporary. Okowa should never cringe to wear the tag  ‘stingy’ leader for as long as he keeps delivering development, the type that engenders peace, stability and fairness in a state which when it sneezes by way of uprising, the nation freezes economically.

Truly, leadership does not have to be loud. Okowa’s quiet leadership has not only birthed peace in the Niger Delta these past six years, it has endeared him to his party, the PDP, as the man to calm the storm in moments of political upheaval. This is the stuff of great leaders. They find courage and strength in their quietness to do things that impact the people positively.

No going back on open grazing ban ...