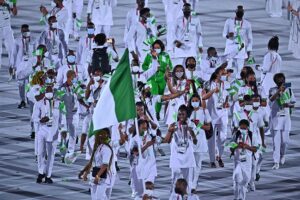 Nigeria’s delegation parade during the opening ceremony of the Tokyo 2020 Olympic Games, at the Olympic Stadium, in Tokyo, on July 23, 2021. (Photo by Ben STANSALL / AFP)

Multiple Olympic Games participant Funke Oshonaike has been sent packing from the Tokyo 2020 Games in the preliminary round.

The 45-year-old Oshonaike lost 1-4 to Juan Liu of the U.S in the women’s table tennis singles.

Oshonaike who has represented Nigeria at seven Olympic Games failed to come to the party losing the first three sets to her opponent.

Compatriot Offiong Edem, in her own match, however thrashed Hungarian opponent Dora Madarasz 4-1 in another preliminary round fixture.

Madarasz however looked to bounce back in the fourth set after taking it 11-9, before Edem extinguished any comeback hopes when she dismissed her opponent 11-4 in the fifth set.(NAN)

CBN and Cryptocurrencies: Between instability and financial ...