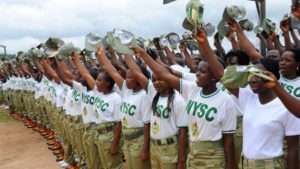 The National Youth Service Corps (NYSC) said on Thursday that one of the 2019 Batch “B” Steam II corps member died in the course of the service year in Sokoto State.

Mr Philip Enaberue, the NYSC Coordinator in Sokoto State, said that seven corps members would also repeat the service year while 10 others have extension of service.

Enaberue said the sanctions would serve as deterrent to other  corps members.

In Ekiti State, 15 Corps Members of 2019 Batch B Stream ‘1’ would have their compulsory one year service repeated, while 26 bagged various extensions.

The National Youth Service Corps (NYSC), Ekiti Coordinator, Mrs Emmanuella Okpongete made the disclosure on Thursday in Ado-Ekiti during the passing-out of 2019 Batch B Stream 1.

According to Okpongete, those who are to repeat the service year absconded from their primary assignments.

“The punishment for their offence is to repeat their service year and refund whatever allowance(s) they might have collected.”

In Sokoto, out of 1, 648 corps members that served in the state, 1,630 would now pass out with the development.

Enaberue further disclosed that two corps members were shortlisted for the State NYSC Award, three for Chairman’s Award while two were billed to receive the prestigious Sultan of Sokoto Award.

He said commendation letters would also be issued to deserving   corps members, adding that the awards were designed to appreciate outstanding performance during the service year.

The coordinator urged the outgoing corps members to utilise the skills acquired during vocational training at the orientation camp and service period.

“Try to be good ambassadors of this country and your family; you should ensure that you associate with people of good character.

“The vocational training you were exposed to during your orientation programme is enough to make you excel without wandering about in the saturated labour market,” he said.