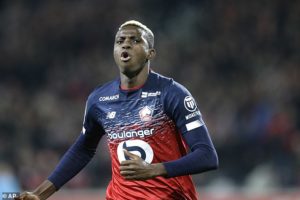 MANCHESTER UNITED have reportedly contacted Victor Osimhen’s agent in a late bid to hijack Napoli’s move for the Lille striker.

The Red Devils are one of many European clubs that have been linked with a summer transfer for the 21-year-old Nigerian.

SunSport previously reported that Serie A giants Napoli were believed to be on the verge of signing him after agreeing a £46million fee with Lille.

Yet journalist Ciro Venerato claims that United have not given up the race to land Osimhen just yet.

He told CalcioNapoli24: “A few hours ago Manchester United phoned Osimhen’s new agent to find out if he had signed with Napoli.

“If an offer from United comes, there would not be many possibilities because they have an economic power superior to that of Napoli.”

Osimhen has quickly emerged as one of Europe’s top prospects following a breakout season in France.

The eight-cap Nigeria international has scored 18 goals in just 38 games for Lille this season, while laying on six assists.

While Napoli are thought to have negotiated Lille down to just £46m, Arsenal were recently told to fork out “close to what they paid for £72m Nicolas Pepe” last summer.

United meanwhile have been linked with a host of names ahead of a busy transfer window including Jadon Sancho and Jack Grealish.

And Red Devils boss Ole Gunnar Solskjaer is hopeful that he will have cash to splash if he wants to.

The Norwegian said: “Manchester City and Liverpool, the last couple of seasons, have put the standard where it should be to win the league.

“We’ve developed over the season and you’re thinking, ‘Yeah, we’re not too far away’ and I’m very happy with the squad.

“If there are any good deals to be made and players to make us better of course we might have to spend some money on that but the squad is great to work with and it’s moving in the right direction.

“We’re still not where we want to be, close enough to challenge for the Premier League trophy but we take one step at a time.”

All you need to know about Haspil, ...