Sports
Home›Sports›Ozil: I love Arsenal, I’m going nowhere, I’ll fight for my place in the team

Ozil: I love Arsenal, I’m going nowhere, I’ll fight for my place in the team 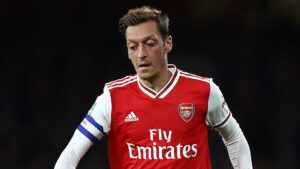 LONDON, ENGLAND – SEPTEMBER 24: Mesut Ozil of Arsenal in action during the Carabao Cup Third Round match between Arsenal and Nottingham Forest at Emirates Stadium on September 24, 2019 in London, England. (Photo by Julian Finney/Getty Images)

Arsenal forward Mesut Oezil says he wants to see out his contract with the Premier League club, which runs to summer 2021.

The Germany World Cup winner, who did not play for the club when the season resumed in June after the coronavirus lockdown, said he would fight his way back into the team.

“My position is clear,” he told The Athletic. “I’m here through to the last day of our agreement and I’ll give everything I have for this club.”

The 31-year-old said he was convinced he still has a role to play for Arsenal.

“Things have been difficult but I love Arsenal. I’ll decide when I go, not other people,” he said.

“Situations like these will never break me, they only make me stronger. I showed in the past that I can come back into the team and I will show it again.”

Ozil, who joined Arsenal in 2013, retired from the German national team after the 2018 World Cup amid controversy over a pre-tournament picture taken with Turkish President Recep Tayyip Erdogan. (dpa/NAN)