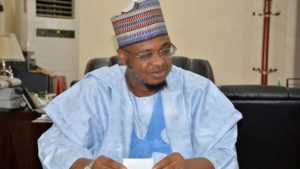 The Nigerian Diaspora Commission (NIDCOM) Chairman, Abike Dabiri-Erewa, insists on the veracity of her story of forceful eviction from the office accommodation given to the commission by the Nigerian Communications Commission (NCC).

Dabiri-Erewa had narrated how the staff of the commission were forcefully evicted at gun point from the accommodation by security operatives at the behest of minister of Communication and Digital Economy, Dr Ali Isa Pantami

Amid claims and counter claims, NIDCOM, in a statement, on Sunday said its staff were denied entry into the premises just two days after they were issued a one-week evacuation order.

The statement titled “Re: Forceful chasing out of NIDCOM staff from NCC Complex” signed by Mr. Abdur-Rahman Balogun, Head, Media and Public Relations Unit NIDCOM insisted that its staff were forcefully evicted.

The statement in full:

“Our attention has been drawn to a statement signed by Dr Henry Nkemadu, Director of Public Affairs of Nigerian Communications Commission (NCC) on Sunday May 24, 2020 describing the forcing out of the staff of Nigerians in Diaspora Commission (NIDCOM) from the occupied fifth floor of NCC Annex Mbora as mere “allegation”.

“The fact of the matter is that the said fifth floor was allocated to NIDCOM by NCC Management since June 2019 and handed over by Mrs Maryam Bayi, its Director Human Resources.

“But due to lack of basic facilities in the complex, NIDCOM staff could not move in gradually until October 2019.

“But while our Chairman/CEO Hon. Abike Dabiri-Erewa was on official assignment with Mr President in Addis Ababa Ethiopia, on the 9th of February, the staff were given one week by the Hon. Minister of Communications and Digital Economy, Dr Ali Pantami to pack out but within 48 hours of the said quit notice, they were forcefully evicted by security operatives attached to the complex on the orders of the Minister on February 11.

“On the allegation that NIDCOM did not move into the offices when allocated, this is untrue, false accusation and contradictory to the statement of NCC to the effect that NIDCOM properties were warehoused and intact in the annex..

“It is our humble opinion that an agency of government ought not to be shabbily treated in a dehumanising manner.

“The Hon. Minister should have acknowledged the fact that the aim of NiDCOM for using the office spaces was not for personal functions but rather for governmental functions with regards to Diaspora engagements.

“The Hon. Minister should have seen the need to give the Chairman of the Commission audience so as to let the Commission staff evacuate their belongings by themselves rather than breaking into the offices without their consent.

“The Commission still has no access to all equipment, furniture and other items carted away on the instructions of the Minister.

“The Hon Minister’s claim that the space was allocated for years is definitely false as NIDCOM is just one year in existence.

“We must, however, thank the Chairman/CEO of NIDCOM, Hon. Abike Dabiri-Erewa, who despite all these was determined to ensure that the work of the Commission did not suffer in any way through her doggedness and dynamism.

“As stated in the Chairman’s remarks as the commission marked its one year in office, the Hon. Minister’s arrogance and utmost humiliation of a government agency is totally unwarranted.

“However, the commission has since moved on, and put the ugly incident behind it as it looks forward to settling into any available office space after the Covid 19 lockdown.”

NNPC: Our recent appointments based on merit, ...