Gov. Samuel Ortom had earlier received some of the governors who were in the state to attend the Party`s Governors’ Forum.

Although details of the meeting is still sketchy, a statement signed by the Director-General of the PDP Governors’ Forum, Cyril Maduabum, said the governors will discuss a number of issues and would come up with an implementable blueprint for tackling insecurity and sundry criminality facing the nation.

Maduabum noted that the meeting would also afford the governors an opportunity to review the state of the party.

The visit might not be unconnected with recent communal clashes between communities in Konshisha and Oju Local Government Areas leading to the death of at least two soldiers and other civilians.

Following the crisis, a military operation is ongoing in the two communities, with Governor Samuel Ortom calling for restraints on all sides, including the military. 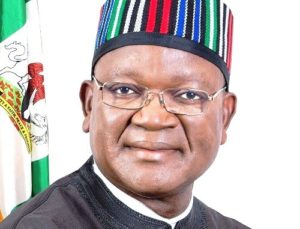 Ortom had in a statement he signed on Friday said, “I have already directed leaders of the affected areas to ensure that the weapons the bandits took away from the military personnel deployed to bring peace between the warring communities are returned without delay.”

The governor asked members of those communities to expose perpetrators of the unprovoked attacks on the military.

While condemning the attacks, Ortom said “such an act is condemnable and also capable of jeopardizing the efforts Government has made to guarantee the return of peace to the area.”

He added, “Our administration is determined to see the end of the crisis and will support security agencies to fish out those fomenting trouble.

“I however urge the military to avoid civilian casualties and protect law-abiding people while efforts are on to recover their missing weapons.”

The National Chairman of the PDP, Prince Uche Secondus, and former Governor of Niger, Babangida Aliyu were also received at the Airport by Ortom.

Gov. Aminu Tambuwal of Sokoto State, Chairman of the PDP Governors Forum, Gov. Ifeanyi Ugwuanyi of Enugu State and Gov. Duoye Diri of Bayelsa had arrived on Thursday ahead of the meeting.

Sen. Gabriel Suswam and other top government officials were also at the Airport with the governor to receive the visitors.