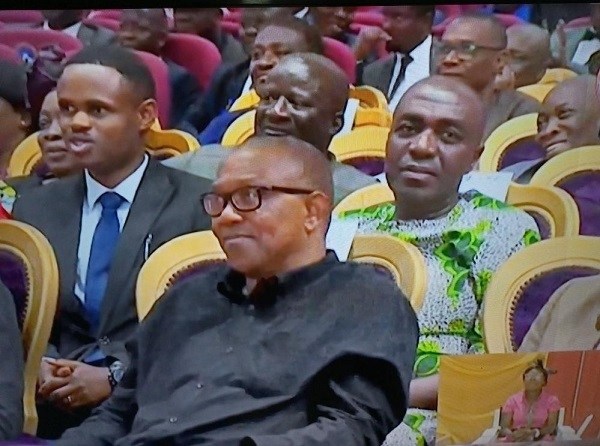 The Presidential candidate of Labour Party (LP), Mr. Peter Obi, on Friday night, drew the loudest ovation at the ongoing Redeemed Christian Church of God (RCCG) 70th Convention holding at the church’s headquarters in the Camp Ground along Lagos-Ibadan expressway.

Pastor Deola Mensah who recognized a few dignitaries at the all-night service beamed all over the world via television and various internet platforms had begun with the recognition of Governor Udom Emmanuel of Akwa Ibom state, Royal Fathers, cross section of ministers from other denominations but was shocked when she recognized Mr. Peter Obi who was worshipping there for the first time.

As soon as she mentioned Mr Peter Obi, the crowd roared in sustained ovation drowning out her voice. Obviously not expecting such loud applause, she tried to raise her voice, stressing that all applause and glory is to God, not man.

Pastor Mensah kept her smile and calm, waiting for the noise to die down, before continuing with her duties.

The former governor of Anambra and a frontrunner in the 2023 presidential election, himself, may not have expected the ovation but he kept a calm composure with a smile as the crowd roared in ecstasy.

Meanwhile, a total of 67 babies were delivered of at the all-week camp meeting as at Friday night, comprising 41 boys and 26 baby girls.

The General Overseer of RCCG Worldwide, Pastor Enoch Adeboye, who preached on the theme Perfect Jubilee, taking his text from Leviticus 25:9-10, assured Nigerians and the global audience that their Jubilee had begun.

The power-packed night was highlighted by outstanding testimonies of creative miracles, divine healings, divine deliverances from the hand of terrorists and miraculous additions of babies to families, some of whom had waited for 25 to 28 years after marriage without children.