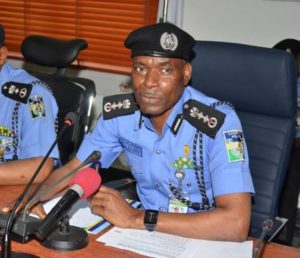 About a dozen detectives of the Nigerian Police Force have invaded the Abuja residence of former Sole Administrator of the National Iron Mining Company, Itakpe, Engr Abubakar Yaro Ibrahim and extra-judicially shot one of his sons.

The police officers, who are members of the Special Tactical Squad (STS) of the Office of the Inspector General of Police (IGP), it was gathered stormed the residence of Engr Ibrahim, penultimate Monday, 18 May, at about 12:45 pm, when he was preparing to join other members of his family to perform the afternoon prayer (Salatul Zuhr).

The STS personnel, it was learnt, violently molested members of Ibrahim’s family, threatening to eliminate their mother. His teenage son Sadiq was shot by one of the armed policemen.

The Force Spokesperson said the Police is investigating the incident.

Confirming the incident to PRNigeria, the traumatized father of the shot teenager, said: “On Monday, 18th May, 2020 at about 12:45pm, I was preparing to join other members of my family to perform the afternoon prayer (Salatul Zuhr), when I heard several gun shots, and some strange people shouting at the top of their voices at members of my family, while some other people were banging doors, trying to forcibly gain entrance into the house through other doors.

“I rushed downstairs to the main living room of the house to find out exactly what was happening and to my greatest dismay I found members of my family lying down on the floor of the living room with their faces facing down and several armed men were standing keeping a watch over them, threatening to shoot anyone that may attempt to run away.”

Ibrahim, who has already demanded an apology from the Police Force and is also pressing for damages, explained that he did not immediately realized that they were operatives from the ST Squad of the IGP office.

He further narrated: “I assumed naturally that they were armed robbers,  since I could not immediately identify them. More so, as we have had experience of attack by armed robbers in the past.

“They led all of us out of the main building into the open space in front of it. It was then that I realised that they were actually security operatives from STS. Then naturally, myself and some of my children started asking them why they were treating us in the manner they were doing. They slapped my children who asked that question saying, ‘’you even have the mouth to talk’’.

“Earlier, while they were in the process of gathering us, one of my children also sought to know why they lay siege in our house and a gun was fired very near his ear apparently to deafen him.”

According to the retired director in the Federal Civil Service, some of the operatives re-entered the boys’ quarter premises and other parts of the house, apparently for further search.

“And thereafter, they came back to meet us at the spot we were gathered. They then decided to take us (myself, my male children, seven in number, and my driver) to their office at Guzape.

“We left my female family members, amongst whom were small children confused, crying and highly traumatized. While entering the vehicle which was meant to convey us to their office, a son of my neighbour happened to be passing by,  and when questioned by a member of the STS team, he explained that he came to inform us that my son, Sadiq was shot and that he was at their house.

“We therefore, went with the STS operatives to pick Sadiq who was obviously in a state of shock and severe pains. Blood had stained his clothes and the piece of the cloth that was used to bandage the wound was greatly soaked with blood.

“I could not control the tears coming from my eyes when I saw my son in that pathetic situation, and I pleaded with the STS operatives to help quickly rush him to the hospital for him get prompt medical attention, and we can thereafter, face any charge they may decide to place on us. All they said was that we should wait for them to finish what they wanted to do, and that they had a clinic in their office where Sadiq would be attended to,” Ibrahim said.

He further said, “the STS operatives came into his house by jumping over the fence between my house and that of my next door neighbour.”

His words: “They met Sadiq doing ablution for the afternoon prayer in the premises of the house. He was greatly frightened due to the manner by which they gained access in our house. He immediately concluded that we were being attacked by armed robbers. To add to his shock the officer who shot him then pointed gun at him and started pursuing him. The officer pursued him over a distance of at least 200m.It is only by the mercy of the Creator that Sadiq survived.

“The officer shouted at the top of his voice saying, ‘thief thief’ so that people in the neighbourhood shall close their doors, and not allow Sadiq entrance. It is also obvious that the officer wanted Sadiq to be lynched by members of the public.

He continued by saying: “At the venue of interrogation we were each asked to make statement, and it was while we were doing so, that it became evident that they were trying to link us up with a kidnap case. According to them, that a Nigerian Army major and one or two other people were recently kidnapped in Kogi State, and the kidnappers demanded a huge ransom before they could be released.

“…after the necessary formalities we were asked to fill bond forms and thereafter, we were allowed to depart at about 5.45pm. I requested that we be provided escort to accompany Sadiq to hospital for proper medical attention. They assigned the person who shot at him to take him along with a relation to National Hospital, Trauma Centre, Abuja for treatment.”

Engr Ibrahim however said, while they were on their way to hospital, Sadiq asked the officer who shot him why he did so, but the officer replied him, saying he should count himself lucky that he was still alive.

“The officer unapologetically stated that he intended to kill Sadiq. He also stated,  without any remorse, that he had aimed at Sadiq’s head while shooting towards his direction. When they arrived at the National Hospital, Trauma Centre, Abuja, they simply dropped Sadiq and the relation accompanying him at the entrance of the Centre and left. This refusal to provide the statement was in spite of the insistence for it by doctors,” Ibrahim noted.

Engr Ibrahim who is currently a visiting lecturer at Ahmadu Bello University, maintained that the STS team did not stormed his house with a search warrant authorizing them to search his house.

He said: “They did not enter my house through the main door, in spite of the fact that it was not locked. They instead jumped over the fence between my house and that of my immediate next door neighbour.

“My son, Sadiq was performing ablution when they entered the home by jumping over the fence between my house and that of my neighbour; this very manner of entering the house greatly frightened him.

“More so that one of the operatives pointed gun at him and pursued him trying to kill. Sadiq actually assumed they were armed robbers when he saw them. The particular person that shot him had hair style that is not befitting responsible people, making the boy to believe they were armed robbers. None of the officers wore a protective gear which they normally wear when they are on such operation. This cast doubt on the motive of the mission of the STS team.

“The same officer who shot Sadiq told my wife, who at that time they entered our compound was in the kitchen preparing food for children, to open the kitchen door or be shot. One of the children advised her to open for him and she did. But for that invention by the child it could have been a different story.

“The shock and trauma we were subjected to, caused another son of mine to collapse at the interrogation venue. The STS operatives had disgraced us as a family by treating us as criminals without the slightest justification for that.

“I served this Country to the best of my ability and I retired as a Director from the Federal Civil Service, and I had never been linked to any criminal act. Even on retirement I am still contributing to the development of the country through many different facets. I am presently a visiting lecturer in the Ahmadu Bello University (ABU) Zaria. I am living no stone unturned in trying to bring up my children in the best Islamic way. Three of my children have memorized the Holy Quran, and Sadiq is one of them.

“I and members of my family have been unjustifiably humiliated, traumatised and inhumanely treated by the STS operatives. My fundamental human rights have been violated and trampled upon. I therefore demand that the STS staff involved be appropriately sanctioned for unprofessional and unethical conduct in the conduct of their duty to serve as deterrent to other officers. They should also forward a letter of apology to myself and my entire family.”

When contacted, the Force Spokesperson DCP Frank Mba told PRNigeria that the Police Headquarter is investigating the incident and would make its position known soon.

Mba said: “There are different versions to this report. We are, nevertheless, investigating the controversy over the incident and we will surely make our position known and take appropriate actions on the issue.”