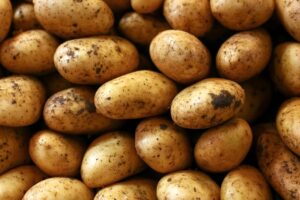 Muopshin said on Sunday in Jos that it was estimated that the potato market would generate about N18 million monthly.

The coordinator said that the value chain project built markets and handed over to the local governments and communities to manage.

He said that constitutionally, markets are under the control of the local government councils and every bag of potatoes brought into the market has a cost on it.

However, he said that records needed to be kept and markets to be well-organised to realise any meaningful income.

Muopshin further said that with the help of African Development Bank, a tissue culture laboratory and three processing centres had been built in the state.

“The procurement and installation of machines in the processing centres will come up in June/July.

“The tissue culture lab has the capacity to produce six million plantlets yearly to meet the demand for high-quality tubers.

“It is from this plantlets that we now have the small tubers that will be multiplied in the field and sold to the farmers,” said Muopshin.

According to him, the processing centres will solve the problem of glut as potatoes could be processed and preserved in various forms.

“Product from the processing centres are to generate revenue in the form of Value Added Tax (VAT) and excise duty.

“Potatoes could be processed into potato food products, feed for cattle, pigs and chickens, processed into starch, and re-used as seed tubers for growing the next season’s potato crop.

“We can also have it as frozen potatoes, French fries in super markets, chips, flakes, a source for alcohol production and snacks,” he listed.

He disclosed that the tissue culture lab had attracted entrepreneurs and investors from abroad who are interested in the intervention going forward. (NAN)

Nuggets in Buhari’s Ramadan message to a ...