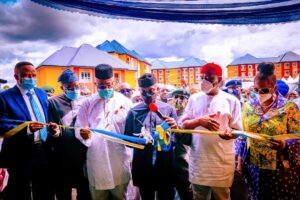 President Muhammadu Buhari on Tuesday, lauded the Efiong Akwa- led Niger Delta Development Commission, (NDDC), for supporting the security agencies in the Niger Delta region in their efforts to ensure a peaceful environment.

The President, stated this at the inauguration of the Nigeria Police Barracks, Special Protection Unit, SPU, Base 6 Project, at Omagwa in Ikwerre Local Government Area of Rivers State.

Represented by  Vice President Yemi Osinbajo, the president stressed that the Police Force was a crucial component of the nation’s law enforcement architecture; being a civil force that was closest to the people in various communities.

“In the past month, we have been undertaking a major reform of the Police Force. We believe that we must increase the number of police personnel hence, we have set yearly recruitment targets.

“We are also in the process of re-equipping both in personnel and hardware. An important feature of the reform is accommodation for officers and I have directed that building of barracks for men and women of the police force should be done in collaboration with the Social Housing effort of the Family Home Funds.

“Today’s event meets two objectives, the first being that it is an important part of our government’s effort to improve the lives and livelihood of our police officers. It is also another important milestone in my administration’s pursuit of peace, prosperity and development of the Niger Delta region. We recognize that establishing adequate security is absolutely integral to the fulfilment of this objective.”

Buhari observed that funding of the Police Force remained a huge challenge, which was why the Federal Government was working with the National Assembly to enact the Police Trust Fund Act, adding that efforts were being made to improve funding for the police.

In his remarks, the Minister,  Niger Delta Affairs Ministry, Senator Godswill Akpabio,  thanked President Buhari for his development support agenda for the zone, which he described as the most peaceful in the country. He also thanked the NDDC Interim Administrator, Mr Efiong Akwa, “for doing a difficult job well.”

According to Akpabio, “this is the second step in our march to development. The first step was the commissioning of the new NDDC headquarters.”

Speaking further the former governor of Akwa Ibom State reiterated the commitment and determination of the Buhari-led government to recover all stolen money belonging to the NDDC as revealed by the recently concluded forensic audit, saying, ” the audit report I recently submitted to the President through the Minister of Justice, revealed a lot and the government at the centre is totally committed to getting back all stolen funds. The Commission, in the past, was the cash cow of politicians, who were seeking political offices. That is no longer feasible. NDDC is now a changed commission for the good of all Niger Delta.”

He assured that his Ministry would persist in its quest to complete the East-West road from Warri to Oron in the shortest possible time.

Also speaking, the Inspector-General of Police, Alkali Baba Usman, said the event represented a landmark for the police. He said: “This is very significant for the police. It is a legacy project for the SPU since its creation in 2009. It shows NDDC’s commitment to support the police. It will help the police a lot.

In his welcome address, the NDDC Interim Administrator, Dr Efiong Akwa, said the barracks shows NDDC’s continued commitment to fostering security in the Niger Delta region through the provision of befitting and comfortable accommodation for security personnel.

The NDDC Chief Executive Officer noted that the facility consisted of an administrative block, including the armoury, gate house, underground cell and 66 units of accommodation. These 66 units include the commander’s residence, second-in-command’s residence and 64 one-bedroom flats.

He said: “We acknowledge that the NDDC will not have been able to perform well without the support of the security agencies, especially the police. It follows, therefore, that it is in our best interest to continue to assist the Police to combat crime effectively within the region.”

The Governor of Rivers State, Chief Nyesom Wike, said he was delighted to hear that the era of taking NDDC as a cash cow was over. He commended the NDDC Interim Administration for realising that government was a continuum and that all projects needed to be completed.

He said that the Interim Administrator would feel fulfilled to let the world know some of the projects he had been able to complete. He also stressed the need for synergy between the governors of the region and the NDDC.

In his goodwill message, the Chairman of the House Committee on NDDC, Hon. Bunmi Tunji-Ojo, said that the mandate of the NDDC was gradually being achieved, with projects such as the barracks for the police.

In Komolafe, Buhari made the right choice ...