By Admin
242
0
The Peoples Democratic Party (PDP) says the Presidency’s response to public uproar over the visit of the APC candidate in the Edo governorship election, Osagie Ize-Iyamu to Buhari is an acceptance that the APC candidate is corrupt as alleged.

The PDP in a statement by its spokesman, Kola Ologbondiyan notes that with its defence and endorsement of a person it is prosecuting for corruption, the Buhari Presidency has confirmed that it is not fighting corruption, contrary to its promises, but had become a safe haven for corrupt persons.

The party says the response also reinforced allegations by the sacked national chairman of the APC, Adams Oshiomhole, that the APC candidate is a person of questionable character who is unfit to hold office as governor of Edo state.

The PDP said it is berating the Buhari Presidency for referring to unrelated cases and struggling to justify its widely condemned endorsement of an individual it is prosecuting for corruption.

“By its response, the Buhari Presidency has turned itself into a defender of corruption and advocate for persons charged for corrupt acts in our country”.

“Yet, this is Presidency that claimed to have zero tolerance for corruption; pretended that it cannot eat with corrupt people with the longest of spoons, only to be found struggling to justify why it is swimming in an ocean of corruption”.

“Moreover, beyond the case in court, this is an individual, that APC former national chairman had openly described as a thief, treasury looter, acid bather and who, according to Oshiomhole, is only fit for “night meetings” and not for the position of the governor of Edo state.

“The PDP said such stance by the Buhari Presidency is an assault on the sensibilities of the people of Edo state, who have openly registered their rejection of Ize-Iyamu. 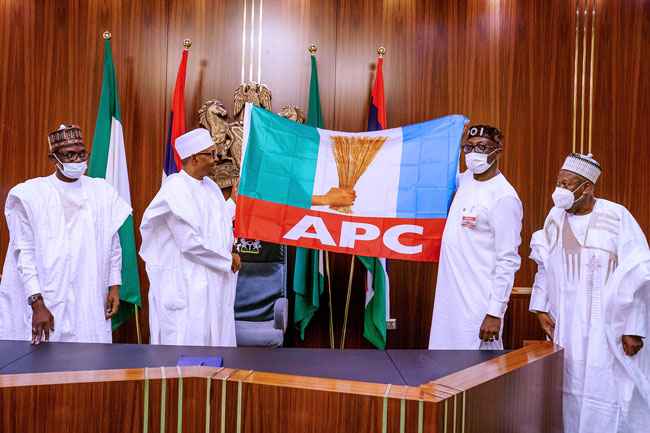 “Furthermore, our party notes the absence of President Buhari, Vice President Yemi Osinbajo, and other top officials of the APC administration at Ize-Iyamu’s campaign flag-off, apparently to dissociate themselves and the government from his baggage of corruption allegation,” the PDP stated.

According to the party, this last-minute stunt has exposed the pretence of Buhari Presidency towards the fight against corruption and further exposed Ize-Iyamu as described by Oshiomhole.

The PDP said it is imperative to place on record that the people of Edo state have already made up their minds to reelect Governor Godwin Obaseki, come September 19.