The Governor of Central Bank of Nigeria, CBN, Godwin Emefiele, was all too charitable in responding to the rather medieval hypothesis of Mr. Godwin Obaseki, governor of Edo state who recently said that the Federal Government printed naira notes for sharing. Emefiele should never have dignified Obaseki with any response except he did so to explain to Nigerians the true situation of the nation’s monetary system. 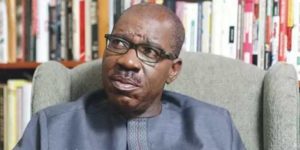 Equally charitable was the Minister of Finance, Mrs. Zainab Ahmed, who also extrapolated the theory of printing money in global economic management and fiscal control.

At a recent programme in Benin, Obaseki had raised the alarm that oil revenue was shrinking and this made the government to print about N60 billion to augment allocation shared to states in March, this year. He also wondered at the increasing debt burden hanging over the nation.

First, let it be placed on record that Obaseki has not said anything new. National debt is growing uncomfortably. Naira notes were printed. Emefiele confirmed as much. The minister said no money was printed for sharing. This does not mean that money was not printed, for the benefit of those who claim Emefiele contradicted the minister. There’s no contradiction here. Money was printed but not for ‘sharing’ as claimed by Obaseki. Every kobo shared among the 36 states and the Federal government at the Federation Account Allocation Committee, FAAC, comes from receipts from crude oil, taxes, tariffs and sundry revenues raised internally from all the revenue-generating agencies and paid into the Consolidated Account. This is even public knowledge and it’s usually advertised and widely publicized. It started from Dr. Ngozi Okonjo-Iweala era as Minister of Finance.

It would have been suicidal if Nigeria did not print money. Other countries have printed money and will continue to print money. It’s not an illegality. It becomes illegal if it was done outside the purview of the CBN. One of the duties of reserve banks (Central banks) all over the world is to print money when necessary.

Let’s consider other economies including developed economies. Last November, the Bank of England announced it will print £150 billion (N78.99 trillion) to boost the nation’s economy as outlook worsens under the weight of covid-19 pandemic. The printed money will be used to buy up government debt to keep borrowing costs low. The UK has had to contend with national lockdowns as did Nigeria and other countries around the world.

Again in 2020, China’s monetary authority, the People’s Bank of China, issued more than 8.98 trillion yuan ($1.36 trillion), the highest amount issued in one year so far. Over the past years, the value of printed money in China has increased steadily according to the dictates of the economy. In the midst of the pandemic, the United States, the European Central Bank, Japan, and emerging economies such as Turkey and Indonesia all printed (or are printing) money to revive their economies which had sagged under the strain of the pandemic. When these countries and indeed other nations print money, their politicians don’t mount the soapbox to parrot it in the manner Obaseki did before his transition committee.

Most capitalist market economies traditionally undergo a boom and bust cycle. It’s the duty of central banks to preempt these cyclic phases and roll out measures to cushion the impact of the bust on the economy and the people. In view of the trauma Nigerian economy had suffered these recent years – two recessions within four years plus the crippling pang of a pandemic, it would amount to dumb monetary economic management if CBN does not print more money to boost economic activities.

For the first time in Nigeria, CBN, under Emefiele, has financed agriculture with substantial evidence of productivity in a critical sector once left in the hands of artisans. Courtesy of the Anchor Borrowers’ Programme, rice, cotton and other agricultural produce are now harnessed in commercial quantity with concomitant improvement in their value chains.

“In 2015/2016, we were in a similar (fiscal) situation, but it is far worse today. We provided a budget support facility to all the states of the country and that loan remains unpaid till now. We are going to insist on the states paying the loan back since they are effectively accusing us of giving them loans.

“Most countries of the world today are confronted by not just the health crisis from the COVID pandemic but also economic crisis. I keep saying this: it would be irresponsible of the Central Bank of Nigeria or any central bank to stand idle and refuse to support its government at this time. Whatever we do in Nigeria is being done in any clime.”

And that says it all. Nobody prints money to distribute as Obaseki crudely paints the picture. Obaseki is an investment banker, a governor of a state. He ought to know better rather than his primitive presumption, even assertion, that money was printed and shared at FAAC. Rather than lament over the so-called printing of money and sharing of same at the end of every month, Obaseki should creatively make Edo state self-sufficient. With all the potential of Edo state, Obaseki has not made it an oasis of roaring success. Edo is burdened by poverty, unemployment and profiled as the state with the highest number of female migrants to Europe in search of greener pasture.

Is it not a thing to be ashamed of that a governor who has reduced his state to a laughing stock would leave weighty domestic challenges staring down at him in his domain to make wild and medieval allegation about ‘printing and sharing’ money. The CBN says loans (budget support facilities) were advanced to states to cushion the harsh economic climate. Has Obaseki paid Edo loan? What is the current internally generated revenue (IGR) of the state? Edo is one of the states ranked as being incapable of surviving without federal allocation. Obaseki should worry about such things. Accusing the CBN of printing money is a subterfuge, an excuse to escape the censure from Edo people who are obviously tired of his tonnes of excuses for non-performance.  Edo does not have a cabinet five months after Obaseki was sworn in on Thursday, November 12, 2020 for the second term. The governor is merely sleeping and waking in Government House. Edo needs purposeful leadership and good governance. That is what they elected Obaseki to do, not playing senseless politics with ‘printing of money for sharing’, a very primitive hypothesis coming from a man who has seen the four walls of a university both in Nigeria and in the United States. Governor Obaseki ought to understand the basic concept of printing money by a reserve bank (central bank) of any country. They do not physically print banknotes and mint coins and start sharing among states or provinces. That’s voodoo economics. But first, let him pay up the loan advanced to his state by CBN, so it can ‘print more money and share’ to him and his ilk.