Our company observed due diligence and subjected the selection process to high level transparency as evidenced in all the technical reports submitted. We did not influence or manipulate the relocation of the ports from Okposo to Ibeno 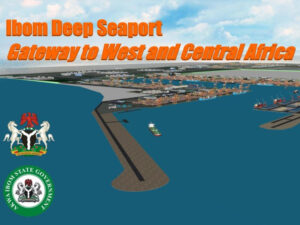 The relocation of the $4.6 billion Ibom Deep Sea Port (IDSP) from Okposo to Ibeno is not political but based on professional and engineering decisions, says Felak Concepts Ltd, the Transaction Advisor/Consultants to the IDSP and Free Trade Zone project.

In a statement issued by Mr. Ezekail Adamu, spokesman for the consultant, it explained that the essence of the project initiated by the Federal Ministry of Transport and Akwa Ibom State Government as a full scale Greenfield Commercial Deep Sea Port Development in line with the proposed Ibom Industrial City (IIC) was too strategic for the Nigerian government and Akwa Ibom state to be subjected to politics.

According to Adamu: “Our company observed due diligence and subjected the selection process to high level transparency as evidenced in all the technical reports submitted. We did not influence or manipulate the relocation of the ports from Okposo to Ibeno.”

Findings showed that five locations were initially shortlisted for the mega-project expected to provide no fewer than 300,000 jobs. Out of the five locations, Okposo was selected as the site at the preliminary stage based on initial/ preceding studies for the Initial Due Diligence (IDD) which itself was subjected to further studies and research to ascertain its suitability.

The consultant explained that this was in tune with global best practices for projects of this magnitude and nature as all the characteristics and parameters were considered “leading or required to arrive at and make a fully founded location selection in the Final OBC/PPF document.”

“The Federal Ministry of Transport was duly notified of our appointment and they swiftly inaugurated the already constituted Ministerial Project Development and Steering Committee (MPDSC) and the Project Delivery Team to midwife/drive the process, as well as direct the TA/Consultants in their deliverables in line with the Infrastructure Concession Regulatory Commission (ICRC) guidelines,” the statement said.

Consequently, according to the statement, the team commenced work and ensured the Initial Due Diligence Report for the Ibom Deep Sea Port and Free Trade Zone was ready by January 2013.

“The goal and objective of this report was to carefully assess the project, verify its feasibility/viability and design a structural approach for the subsequent phases. In other words, the IDD was a preliminary report covering the location analysis of the pre-selected locations, development options for the Port and Free Trade Zone, implementation plan, and preliminary business case among others.”

Adamu explained that none of these is a political decision but basic engineering, economic and other professional considerations.  He said that though the initial name was Ibeno Deep Sea Port, it is now Ibom Deep Sea Port to “depict an all-inclusive project for the entire state.”

To make clarifications on change of location and name, Adamu said the consultant wrote a letter dated 3rd October, 2015  to Akwa Ibom State Government “on the need to convene an immediate town hall meeting involving the TAs, Surveyors, MPDSC members, the Governor, His Exco and all stakeholders within the state on the resolution of salient communal issues; such as the clarification and basis of the change of name from Ibaka to Ibom Deep Sea Port, change of location due to a new engineering alignment and other critical factors and analysis.”

The total cost of construction of the Ibom Deep Seaport is $4.6 billion but the first phase of it is $2.016 billion which was approved on Wednesday Dec. 16, 2020 by the Federal Government.