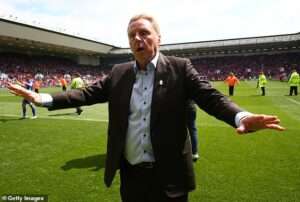 Out of job Harry Redknapp has been tipped for a shock return to management, this time as manager for Nigeria. It will be his African national team experience as a manager.

He has been manager at Tottenham, Southampton, Portsmouth but Birmingham was his last job in 2017.

The 73year-old gaffer is now set for his second foray into international management with Nigeria as the Ministry of Sports is working to make him the new helmsman of the Super Eagles, according to ESPN.

However, the Nigerian Football Federation, NFF, is not keen on the Redknapp project, preferring to extend the contract of German Gernot Rohr whose contract runs out later in the year.

This has pitted the Ministry against the NFF. Investigations by Political Economist showed that more Nigerians would prefer any other coach to Rohr whom most respondents tagged not good enough to manage “our crop of talented young players.”

Indeed Nigeria has a young team of highly gifted players, perhaps the youngest ever national team the country has ever produced.

Rohr’s contract is due to expire in June and the NFF have been delaying over agreeing a new deal since late last year.

He told ESPN: ‘Everything is fine. We all continue together.’

The NFF released a statement last week saying: ‘The Executive Committee mandated the General Secretary to liaise with the Super Eagles’ technical adviser, Mr. Gernot Rohr, with a view to concluding all matters around Mr. Rohr’s new contract within the next one week.

Rohr has been in charge of Nigeria since 2016 but has not won any championship with them. Nigeria lost out at the last Africa Cup of Nations, AFCON.

France bans use of Hydroxychloroquine for Covid-19 ...