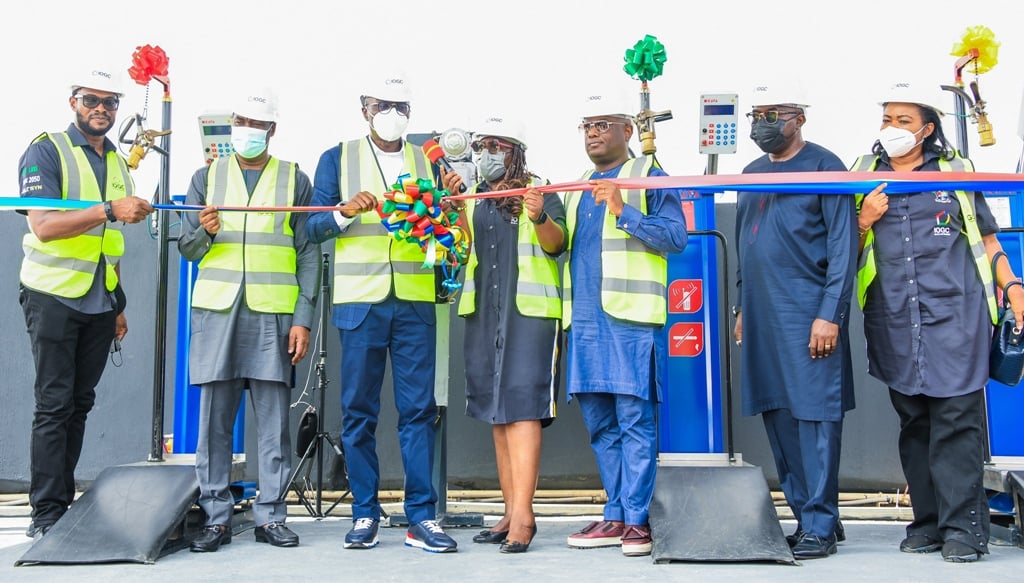 Lagos State records another progress in its plan to cut down the use of dirty fuels responsible for carbon emission and air pollution. Governor Babajide Sanwo-Olu, on Thursday, commissioned a 40 metric tons Liquified Petroleum Gas (LPG) Refill Plant in Ikorodu division.

The Governor, in company of his Deputy, Dr. Obafemi Hamzat, opened the gas plant built by IBILE Oil and Gas Corporation (IOGC), the State-owned energy firm, in Igbogbo-Baiyeku Local Council Development Area (LCDA) to ramp up supply of LPG for domestic use.

The move, Sanwo-Olu believes, will create an alternative gas market for residents, thereby crashing the cost of cooking gas in Lagos.

The energy project was initiated to key into the nation’s ambitious goal to develop the natural gas industry and encourage domestic use of safe cooking gas.

In Lagos, less than 30 per cent households use gas for cooking. As an alternative to kerosene and charcoal, LPG is a clean burning fuel that supports smoke-free indoor and outdoor cooking.

The Ikorodu plant is the fourth facility delivered by the corporation. Three other refill plants of varying capacities were built in Amuwo Odofin, Alimosho and Iponri areas of the State.

Sanwo-Olu said the inclusion of gas into the State’s energy mix was critical to the continuous prosperity of Lagos, stressing that the project would not only transform the State into a gas economy and stimulate commercial growth, but also enhance quality of life by reducing carbon footprint in the environment.

The target, the Governor said, is to increase supply of cooking gas in local communities, thereby raising domestic LPG usage from the current 25 per cent to about 80 per cent before the end of 2023.

He said: “The gas plant being commissioned today reflects the desire of our administration to align with the global action to reduce carbon emission and address the climate change challenge. One of the measures, which this gas plant will support, is promoting increased adoption of LGP for domestic use in Lagos.

“Our vision is to transit the State into a gas economy and ensure an energy mix that provides different fueling options for residents with the introduction of Gas-for-Transport and Gas-to-Power projects. Expanding the domestic usage of LPG is critical to the continuous prosperity of Lagos and the attainment of our administration’s desire to transform the State into a 21st Century economy.”

The Governor expressed concern over the high cost of cooking gas occasioned by the high foreign exchange rate and introduction of 7.5 per cent VAT by the Federal Government, describing the situation as “unacceptable” in the face of high cost of living.

Sanwo-Olu said the increment in LPG price put the nation at the risk of reversing all gains achieved from awareness on the advantages of using LPG for domestic cooking.

The Governor urged the Federal Government to reverse the trend in order to make the commodity affordable, while also increasing availability of safe cooking gas in the country.

He said: “Not only are we excited with our modest intervention by Lagos in the LPG market, it is only when we reduce the cost of basic commodities such as cooking gas that the true dividends of democracy can be felt by the people.

“We have done a lot of advocacy for people to appreciate the benefit that comes with the use of gas for domestic cooking, such as reduction in carbon footprint, and improved quality of life. If we have made this great effort, the least the Government can do is not to make the commodity unaffordable for the populace.”

Commissioner for Energy and Mineral Resources, Olalere Odusote, said the plant was built with the highest safety standards, noting that the siting of the facility was deliberate to serve a large number of the populace.

He said the State had the plan to expand the gas facility to 20 units which would be spread across all divisions.

Managing Director of IOGC, Doyin Akinyanju, said the gas plants developed by the corporation had the capacity to supply 20,000 homes within the radius of operation, adding that jobs were created for young people in the supply chain through the use of purpose-built vehicles for door-to-door delivery in neighbourhoods.

She said: “Nigeria has an abundant gas deposit that needs to be rapidly developed. Lagos also is blessed with two known offshore fields – Aje and Ogo – in Badagry with large gas deposits. IOGC is taking steps to develop a bulk offtake facility which will ensure gas security in Lagos, as well as provide a competitive pricing advantage.

“We will continue our sensitisation and awareness campaign in the neighbourhoods where we are located to take Lagosians away from the use of dirty fuels like firewood, charcoal, kerosene to Gas for cooking. Today, we start a new journey with cooking gas by creating a market that will make it safely accessible.”